Police detained a demonstrator in Havana on July 11, when hundreds of people went out to the streets in several cities in Cuba to protest food shortages and high prices. Ramon Espinosa/Associated Press 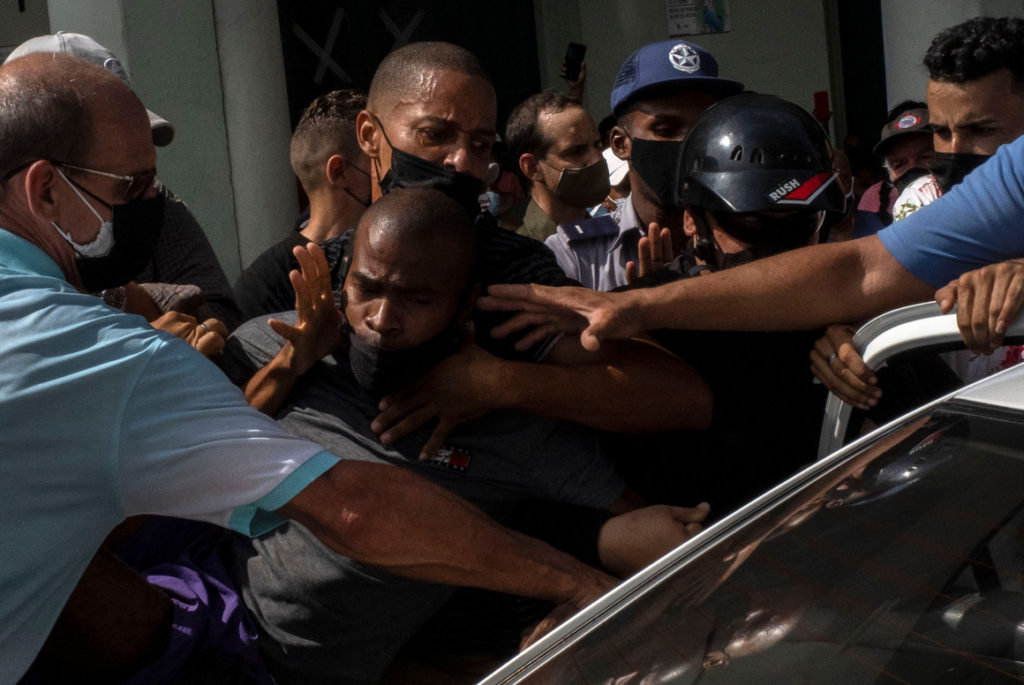 Recent antigovernment protests in Cuba were the biggest in more than six decades. But they were historic, too, because many of the protesters were Black Cubans, a group that is increasingly breaking with the country’s Communist government.

The protests, which were repressed by police and organized government supporters, included Cubans of all ages, races and classes. But Afro-Cubans were at the forefront of many of the nationwide demonstrations, according to protesters and Cuba experts. The most intense protests and violence, including the lone death acknowledged by the government, happened in impoverished and largely Black neighborhoods, Cuba’s government and dissidents say. And many, if not a majority, of those arrested in a subsequent crackdown are Black, their relatives and activists say.

“This is a fundamental break between Afro descendants and the government,” says Manuel Cuesta Morúa, a Black Cuban civil-rights activist. “The government saw delinquents where there are only angry people fed up with the lack of social mobility, lack of freedom and structural racism.”

The growing defiance of Afro-Cubans, who make up more than a third of the island’s 11 million people, is a turnaround for a group often seen as natural allies of a government that 62 years ago overthrew a dictatorship and prohibited racial discrimination. But in the past three decades, many Black Cubans, like many other Cubans, have become disillusioned with government policies that have widened racial and income disparities. The pandemic and a steep economic contraction have added to the pain.

While the government has long painted a picture of racial equality in Cuba, experts say Blacks in Cuba still have a harder time getting ahead than whites. Blacks are the poorest Cubans, have fewer people sending them dollar remittances from abroad and struggle to get jobs in either top government posts or the key tourism industry, according to surveys, Cuba analysts and interviews with Cuban Black activists.

The exact number and racial profile of people arrested and injured during the protests is difficult to determine because the government won’t disclose that information. Cuban civil-rights groups estimate that nearly 800 people have been detained since a wave of protests on July 11.

About 100 people face more serious criminal charges such as destroying government property or attacking police officers. A majority of those facing criminal charges are Cubans of African descent, according to a person familiar with the trials. 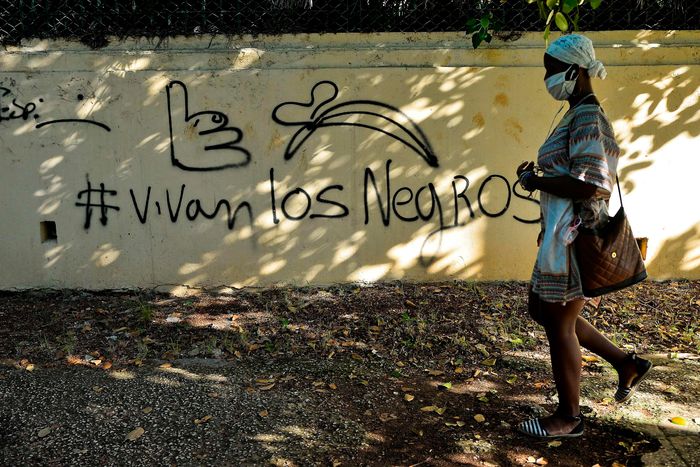 The government has long painted a picture of racial equality in CubaPhoto: yamil lage/Agence France-Presse/Getty Images

In recent weeks, scores of young Afro Cuban protesters have undergone summary trials behind closed doors, nearly all for minor offenses like inciting public disorder. Judges are handing out prison sentences of nine to 12 months in prison or house arrest, according to relatives of those arrested and activists.

Senior Cuban officials deny that the government’s response to the protests has been racially tinged. “Everyone knows that if there’s a government that has done a lot for racial equality and eliminating the vestiges of racism, it’s Cuba,” said a government spokesman. Foreign Minister Bruno Rodríguez said the protests aren’t the result of social turmoil but due to U.S. interference and the work of “criminals from down-and-out barrios.” These are code words frequently used by the government to refer to Black Cubans from poor neighborhoods, Black activists say.

A senior Cuban official in charge of criminal investigations at the Interior Ministry, Col. Moraima Bravet, said many of the protesters came from “lowlife families” and she singled out a protest in a largely Black neighborhood known as La Güinera.

“Instigators can be, as we saw in the case of La Güinera, people on motorcycles chanting ‘Patria y Vida.’ That is stirring up disorder,” she said on television, referring to the title “Fatherland and Life,” a confrontational rap song composed by Black Cuban artists that became the anthem of the protests.

Some residents of La Güinera tell a different story. “They demonstrated peacefully, demanding freedom,” said Caridad Besú, a longtime La Güinera resident. Odet, her daughter, a hairstylist, and her son-in-law were detained in mid-July and face public-disorder charges after Odet posted a video of peaceful protests on Facebook.

Across Cuba, there are stories of young Black people who protested and were thrown into jail, according to Anamely Ramos, a member of the San Isidro Movement, a group of mostly Black Cuban artists and dissidents at the forefront of recent demonstrations. She has compiled a list using posts on Facebook and through interviews with relatives of the detained.

They include people like Virgilio Mantilla, arrested following the July 11 protests for shouting “down with the dictatorship” from his house. He has since started a hunger strike after receiving a nine-month prison sentence for contempt last month, Ms. Ramos said.

A 2019 survey of 1,049 Cubans carried out by the German Institute of Global and Area Studies, a Hamburg-based nonprofit, found that 95% of Black Cubans were on the bottom rung of Cuban society in terms of income. 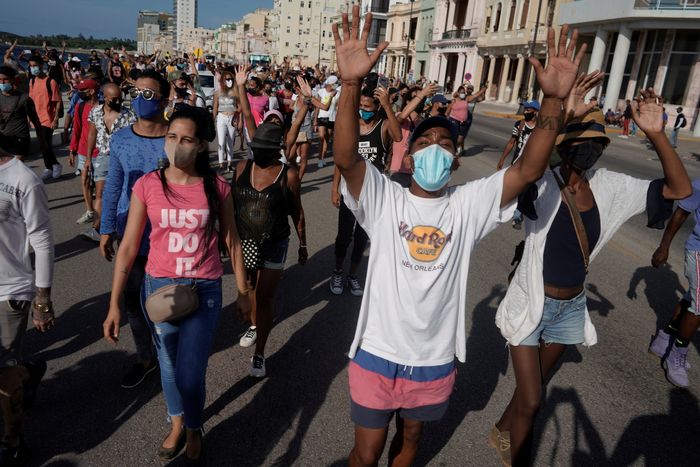 Because a majority of the Cubans who fled after the 1959 revolution were white, nearly 8 in 10 Cubans who get dollar remittances from relatives abroad are also white, the survey found. Because that cash allowed many in Cuba to open a small business, white Cubans own 98% of the restaurants and bed-and-breakfasts that typically cater to the tourism trade, the survey found.

Access to dollars or euros makes a big difference in Cuba’s two-tier economy. Retail stores that sell products in the local currency, usually at subsidized prices, have little to sell. But another set of stores where the shelves are well stocked only accept foreign currency with prices out of reach for most Black Cubans.

Black Cubans have also been largely cut out of jobs in hotels and restaurants by operators who have favored lighter-skinned Cubans, says Alejandro de la Fuente, a Harvard University expert on Cuba who has done field research on Black participation in the tourist industry.

“Blacks live close to the tourist-dollar economy, but are excluded from it,” he said. “They are the losers of the dollar economy installed in Cuba in the 1990s.”

Black Cubans are also largely absent from senior government positions, says Javier Corrales, a Cuba expert at Amherst College. Black Cubans are well represented in the National Assembly, a largely powerless legislative body that meets to rubber stamp legislation twice a year, Mr. Corrales says. But it’s the president, his cabinet and close advisers who wield real power. The vast majority of these are and have always been white, he says.

A review of the website of the current 34-person Council of Ministers, the government’s top executive body, shows it has only three, or perhaps, four Black members. Cuba also has a Black vice president.

Some Black Cubans live on the fringe, slipping in and out of Havana’s underworld of black-market deals, prostitution, petty crime and police abuse. Maykel Castillo, one of the authors of “Patria y Vida,” spent 16 years in prison before music changed his life, said Eliexer Márquez, his hip-hop partner and childhood friend.

Mr. Castillo was detained by the police in May, and is now in a high-security prison awaiting trial on charges of resisting arrest and disobedience, which could keep him locked up for years. Friends say he remains defiant.

At a previous protest in November, Osvaldo Navarro, a Black activist, said Cuban police officers hurled a commonly used racist expression at him.

“You ungrateful Black, the revolution gave you everything,” the policeman shouted at him, says Mr. Navarro. He retorted: “The revolution gave me nothing.” Many other Black Cuban activists said they had suffered similar verbal abuse.

That got a stinging response from Black Cuban rapper Roberto Álvarez, who goes by the name Robe L. Ninho.

“Find out if Black rights are being respected, if there is racism here or not,” Mr. Álvarez retorted in a video.

Black Lives Matter didn’t respond to a request for comment.

Write to José de Córdoba at jose.decordoba@wsj.com and Santiago Pérez at santiago.perez@wsj.com