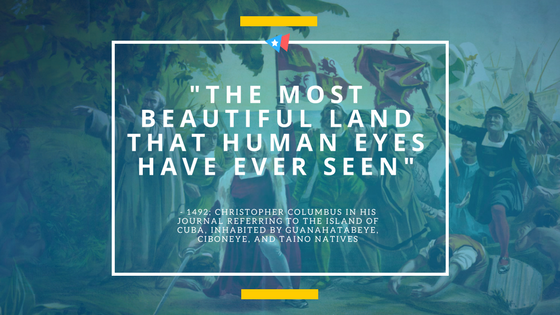 Christopher Columbus made four trips to the New World. On his first trip on Oct. 27th, 1492 he arrived at the north coast of the island of Cuba. He took possession of the island in the name of the Catholic monarchs of Spain and named it Juana in honor of the Spanish princess. Columbus fell in love with the beauty of the countryside: the bright sunlight, the intense green color of its vegetation, its contrasting turquoise of the sea. Impressed, he wrote in his diary this is “the most beautiful land that human eyes have ever seen.”

Columbus called the inhabitants he found in Cuba Indians thinking he had arrived in India. The island’s native population was divided into three main groups: Guanahatabeyes, Ciboneyes, and Tainos. The latter group was the most developed. They were excellent farmers and fishermen. They lived in small villages called batey. Their houses were built from weaved palm tree leaves, similar to present-day bohios. Each family had its piece of land called conuco where they raised yams, corn, cotton, tobacco, and yucca-based cassava, which early settlers used as a bread substitute. The first seven towns were founded during the Spanish conquest under Diego Velazquez’ orders. Today, they are Cuba’s oldest cities.