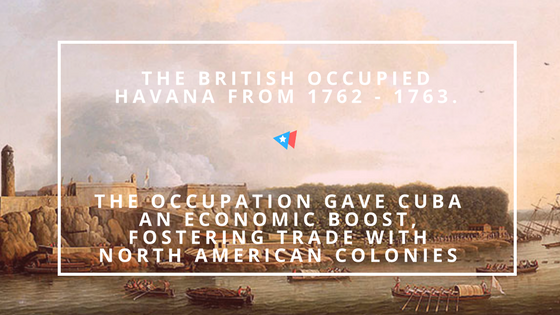 For the first 300 years of its colonial life, Cuba remained as a less important part of the Spanish empire when compared with Mexico and Peru.  Cuba had little mineral wealth and Spaniards searching for gold and silver concentrated on the mainland colonies.  Cuban society developed slowly and the island was primarily a supply naval base for Spanish fleets transporting metals from Mexico and Perú.

Several factors converged in the late eighteenth century to bring Cuba into world affairs and to give sugar a major boost.  In 1762-63 the British occupied Cuba.  Oppressive Spanish trade restrictions were lifted and Cuba was thrown open to trade with England and its North American colonies.  Following the occupation, Spain relaxed its restrictive trade policies and allowed Cubans to trade with its neighbors to the North.

The occupation gave Cuba an initial economic impulse.  When the slave uprising and the destruction of the sugar properties in neighboring Haiti in the 1790s, Cuba was ready to become the sugar bowl of the Caribbean and replace Haiti as the supplier of sugar to Europe.  Thousands of slaves were imported to work the sugar plantations.  Throughout the 19th century sugar as well as coffee and tobacco became increasingly important.   Large cattle estates were subdivided.   The Spanish Crown also aided the development of sugar.  In 1795 Cuba had 478 sugar mills.  By 1860, it is estimated that there were over 900 steam sugar mills producing over 500,000 tons of sugar.