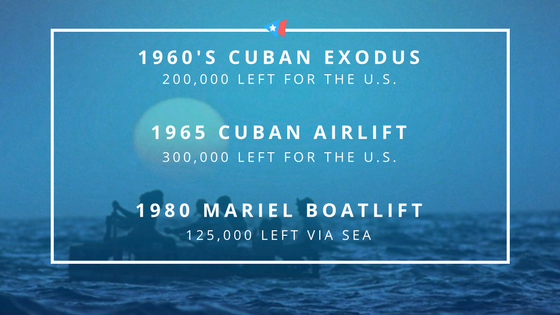 January 1, 1959, the toppling of dictator Batista, signaled the dawn of a new era.   Power lay in the streets and Fidel Castro and his rebels came down from the mountains to claim it.  A magistrate named Manuel Urrutia was sworn in as the new Cuban president.  The cabinet was pluralistic comprised of figures of a diverse political spectrum.  The charismatic leader of the 26th of July movement, Fidel Castro was appointed Commander in Chief of the Armed Forces.  Castro quickly emerged as the most prominent political figure.

On January 8th a triumphant Fidel addressed a large gathering in the capital city of Havana.  He concluded his speech by declaring that he had no political ambitions and promising elections.

April 15th 1959, Fidel Castro arrived in the United Sates.  Before leaving Cuba, Castro told reporters that the trip would serve to strengthen the ties with the U.S.

Castro hid his anti-Americanism and his plan to transform Cuban society into a totalitarian state.  He defended what he called revolutionary justice, Time magazine reminded its readers that by the end of April 1959, 529 Cubans had been executed.  Communist presence grew within the revolutionary ranks.

In late 1960 and early 1961 the U.S. organized and trained 1,200 Cubans for an invasion of Cuba to overthrow Castro.  The vital air cover over the Bay of Pigs failed.  It was a tragic disaster.

After the failed invasion Castro proclaimed, “Porque hay que decir que por encima de todo, somos Marxista-Leninistas.” “What we can say, above all, we are Marxist-Leninists.”  He embarked on a program to create a new man along socialist ideas, emphasizing loyalty to the party and the leader and anti-Americanism.

Fearing Marxist indoctrination, many Cuban parents sought a way out for their children. Operation Pedro Pan sent thousands of unaccompanied children to the U.S. in the care of the Catholic Church.  Many of these children never saw their parents again.

Cuba became an ally of the Soviet Union and by 1962 the Soviets introduced nuclear missiles into Cuba, bringing the world close to a nuclear holocaust.

Castro announced that those wanting to leave could do so and he encouraged various migrations.

Today there are over 1.5 million Cubans in exile.