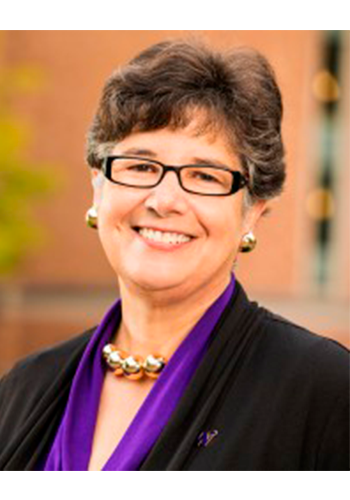 Dr. Ana Mari Cauce was born on January 11, 1956 in Havana, Cuba.  She is the daughter of Vicente Cauce, Minister of Education, under Fulgencio Batista.  When she was three years old, her family fled the island and settled in Miami, Florida.

She has received numerous awards, including the Dalmas Taylor Distinguished Contribution Award, the Luis Fernando Esteban Public Service Award, the James M. Jones Lifetime Achievement Award of the American Psychological Association, the Grace Hopper Exemplary Leadership Award and the Distinguished Contribution Award from the Society for Community Research and Action. In 1999 she was awarded the Distinguished Teaching Award, the highest honor the University of Washington gives to faculty members for their work with students in and outside the classroom.

Currently, Cauce is also a professor of Psychology and American Ethnic Studies, with secondary appointments in the Department of Gender, Women and Sexuality Studies and the College of Education. She maintains an active research program, focusing on adolescent development, with a special emphasis on at-risk youth. She is also a strong advocate for women and underrepresented minorities to pursue careers in science, technology, engineering and mathematics.