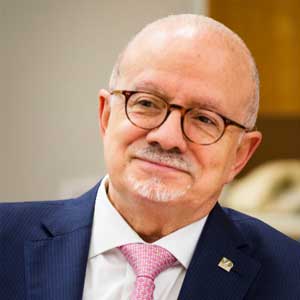 Eduardo J. Padron is the President of Miami Dade College, one of the largest colleges in the State of Florida and in the United States.

Born in Santiago de Cuba in 1944, Dr. Padron arrived in the United States in 1961 with his family. He enrolled in Miami Dade Conununity College and earned a doctorate in economics from the University of Florida.

He has served on the White House Conunission on Educational Excellence and on the board of trustees for the Carnegie Foundation for the Advancement of Teaching, the American Council on Education, American Association of Colleges and Universities, American Association of Conununity Colleges, Campus Compact, the League for Innovation and on the executive advisory board of the Harvard Journal of Hispanic Policy. He has also served on the governing board of the Hispanic Association of Colleges and Universities, the board of directors of the U.S. Congressional Hispanic Caucus Institute, on advisory councils for Secretaries of State Cyrus Vance and Ed Muskie and Secretary of Education Shirley Hufstedler.

Padron has been selected to serve on posts of national importance by six American presidents. In 1993, President Bill Clinton recognized him as one of America’s foremost educators. President George W. Bush nominated him to the National Institute for Literacy Advisory Board and the National Economic Summit and President Obama appointed him Chairman of the White House Conunission on Educational Excellence for Hispanic Americans.

He has received the highest orders of distinction from the governments of Spain, France, Mexico and Argentina for his outstanding leadership in the area of educational opportunity and cultural enrichment.