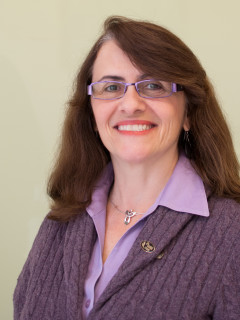 Dr. Elsa A. Murano was born on August 14, 1959 in Havana, Cuba.  She fled from Cuba to Curaçao with her family on July 4, 1961.  They later moved to Colombia, where her father worked for IBM. She also lived in Peru and El Salvador before moving to Puerto Rico. Once her parents divorced, she moved with her mother and three siblings into an apartment in Miami, Florida in 1973.

She received her bachelor’s degree in biological sciences from Florida International University in 1981.  Though she planned on attending medical school, she was more interested in research, and decided to expand her educational background. She was accepted into the graduate program at Virginia Tech where she received a master’s degree in anaerobic microbiology in 1987, and then a doctorate in food science and technology in 1990 with specialty in food safety.  From 1990 to 1995, Murano served as an assistant professor in the Department of Microbiology, Immunology and Preventive Medicine at Iowa State University where she also served as Researcher-in-Charge of the Food Irradiation Facility. In 1995, she was granted tenure at Iowa State. Shortly thereafter, she was recruited by Texas A&M and became associate professor of Food Science & Technology in the Department of Animal Science, as well as associate director of the Center for Food Safety within the Institute for Food Science and Engineering. She later served as director of the center from 1997 to 2001. During this time, she became a full professor and the holder of the Sadie Hatfield Endowed Professorship in Agriculture.

In 2001, due to Dr. Murano’s reputation as one of the top experts in her field, U.S. president George W. Bush appointed her as the Under Secretary of Agriculture for Food Safety for the U.S. Department of Agriculture, the highest-ranking food safety U.S. government official, representing U.S. food safety policy at international standard-setting organizations such as the Codex Alimentarius Commission. As the Undersecretary, she oversaw Food Safety and Inspection Service policies, ensuring U.S. meat products are safe, wholesome, and correctly packaged. Over the years in her position, she led efforts that resulted in dramatic decreases in the number of food recalls.

At the end of President Bush’s first term in office, Dr. Murano returned to Texas A&M in January 2005, becoming the first woman, and first Hispanic to be named Vice Chancellor of Agricultural and Life Sciences of the Texas A&M University System, Dean of the College of Agriculture and Life Sciences, and Director of the Texas Agricultural Experiment Station.  During her tenure, Vice Chancellor Murano reversed the declining trend in student enrollment in the College of Agriculture, secured more than $40M for bio-fuels research initiative from private industry, increased legislative appropriations by 26%, and secured $50M from the Texas A&M System to build a new Agriculture Headquarters Complex. Such was her rapid rise to prominence within the University, that in December 2007 she became the sole finalist for the Texas A&M presidency.  She took full duties as president on January 3, 2008,  and became the first female, the first Hispanic-American, and the first person under the age of 50 to serve in the position.  Due to policy differences between her and Chancellor Mike McKinney, she resigned to her position as president on June 14, 2009.  Murano returned to the faculty as a professor, with the Board awarding her the title of President Emerita.

From 2012 to present, she serves as Director of the Norman Borlaug Institute for International Agriculture, which implements projects across the world to elevate small-holder farmers out of poverty and hunger through science.  She serves on the Board of Hormel Foods Corporation since 2006, and currently also serves on the Board of Food Safety Net Services, and on the Food Safety Advisory Board for Ecolab.