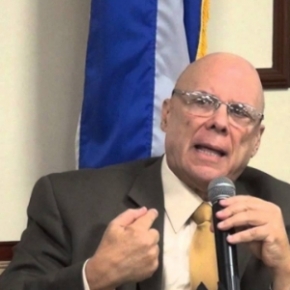 Pedro Roig was born in Santiago de Cuba, Cuba. Roig was the co-founder and Executive Director of the Cuban Studies Institute with extensive experience as an educator, attorney and administrator, with a BA and MA degree from the University of Miami and a Juris Doctor degree from St. Thomas University.

For over twenty years, Roig was the Principal of a co-educational, bilingual academy with a high rate of student admission to universities. From 1991 to 1994, he served in the U.S. President’s National Advisory Board on Education and taught several history courses at Miami Dade College, and Florida International University.

From 2003 to 2010, Roig served in the federal government as Director of the Office of Cuba Broadcasting (OCB). In 2006, he was honored for his stead-fast leadership with the Superior Accomplishment Award and in September 2010 with the Board of Governors Resolution (BBG) for his outstanding accomplishment fulfilling Radio and TV Marti’s mission. Roig is the author of several books including The Death of a Dream: A History of Cuba and Marti: The Cuban Struggle for Freedom.

Roig has practiced law in the field of real state, torts, transaction law, and has served as court appointed mediator. He is a former Senior Research Associate at the University of Miami and an active member of the Florida Bar and a veteran of Brigade 2506. He is currently with Hirzel Dreyfuss & Dempsey, PLLC, Law Firm.