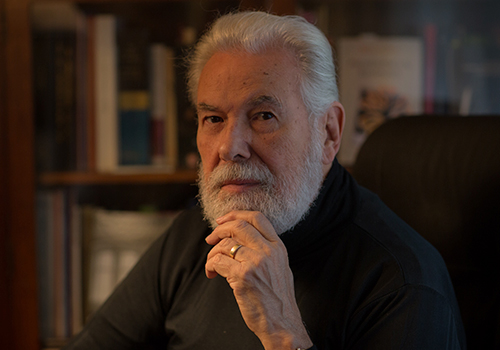 Robert Lima was born on November 7, 1935 in Habana, Cuba.  He is a poet, literary critic, bibliographer, playwright, editor, biographer, and translator.

Lima received a BA in English, Philosophy and History (1957) and MA in Theatre and Drama (1961) from Villanova University, and a Ph.D. in Romance Literatures from New York University (1968). After active duty in the United States Army Reserve, he worked in New York City in publishing and film, as well as in broadcasting for Voice of America before starting his teaching career at Hunter College of the City University of New York (1962–1965). Thereafter, he taught at Pennsylvania State University (1965–2002), and also abroad in Peru (U. de San Marcos and U. Católica) as a Senior Fulbright Scholar and in Cameroon (U. of Yaoundé) with grants from the United States Information Agency. Up to mid-2018, he had published 36 books, over 150 articles in a variety of fields, including on the works of Lorca, Valle-Inclán, Borges, Afro-American religions and facets of esoterica in world drama. Over 400 of his poems have appeared throughout the U.S. and abroad in periodicals, anthologies, and in his poetry collections.

In the 1960s he read poetry in many Greenwich Village venues, co-editing the anthology Seventh Street: Poems from ‘Les Deux Megots’ (1961) and the second Judson Review. In 1974, he created Surrealism—A Celebration, a multi-media event at Penn State in honor of the 50th anniversary of the surrealist movement. Sponsored by The Pennsylvania Humanities Council, on whose board he sat, he created Poetry on the Buses in Central Pennsylvania in 1985. From March through August 2004, Pennsylvania State University libraries exhibited The Poetic World of Robert Lima, a retrospective of his poetry career from 1955 to the then present. His poem Astrals won first prize in the Phi Kappa Phi poetry competition for 2009 and was published in the society’s journal, Forum (spring 2009). His illustrated poetry has been exhibited at the Schlow Centre Region Library, the State Theater, both in State College, PA, and at the Bellefonte Art Museum in Pennsylvania. In 2017, he was invited to record his poetry at the Library of Congress Hispanic Division for the prestigious cache of recordings by prominent writers.

Lima is a professor emeritus of Spanish and Comparative Literatures at Pennsylvania State University, as well as fellow emeritus of the Institute for the Arts and Humanistic Studies. Lima is an academician of the Academia Norteamericana de la Lengua Española and a corresponding member of the Real Academia Española. Honored as a distinguished alumnus by Villanova University, he was also inducted into the Enxebre Orden da Vieira in Spain and dubbed Knight Commander in the Order of Queen Isabel of Spain by King Juan Carlos I. His 40-year career as a university professor and writer was heralded in A Confluence of Words. Studies in Honor of Robert Lima, published by Juan de la Cuesta Hispanic Monographs in 2011. In 2017, he was received into the Imperial Hispanic Order of Charles V, at the Alcazar Palace in Segovia, Spain as Knight Commander Gran Placa, at the hands of the Prince of Borbon.

He resides in State College, PA.