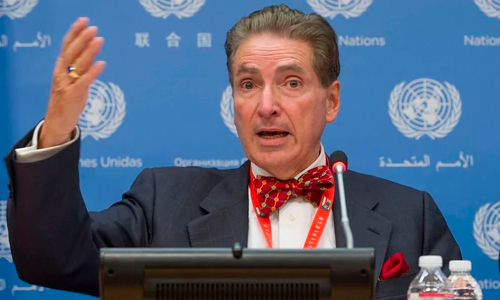 Alfred-Maurice de Zayas was born on May 31, 1947 in Habana, Cuba.   He grew up in Chicago, Illinois. Zayas studied history and law at Harvard, where he obtained his J.D. He practiced corporate law with the New York law firm Simpson Thacher and Bartlett and is a retired member of the New York and Florida Bar. He obtained a doctorate in history from the University of Göttingen in Germany.

He worked with the United Nations from 1981 to 2003 as a senior lawyer with the Office of the UN High Commissioner for Human Rights and the Chief of Petitions.  De Zayas’ work focuses inter alia on the judicial protection of peoples and minorities. He has written and lectured extensively on human rights, including the jurisprudence of the United Nations Human Rights Committee, the Armenian Genocide, the Holocaust, the US-run detention centers at Guantanamo Bay, ethnic cleansing in the former Yugoslavia, the expulsion of Eastern European Germans after the Second World War, the invasion of Cyprus by Turkey in 1974, the rights of minorities, the right to freedom of opinion and expression, and the rights of indigenous peoples.

From May 1, 2012 to April 30, 2018, Alfred-Maurice de Zayas served as the first UN Independent Expert on the promotion of a democratic and equitable international order.  Mr. de Zayas has also been visiting professor of law at numerous universities including the University of British Columbia in Canada, the Graduate Institute of the University of Geneva, the DePaul University Law School (Chicago), the Human Rights Institute at the Irish National University (Galway)and the University of Trier (Germany). Currently, he teaches international law at the Geneva School of Diplomacy.

In 2009, de Zayas was a member of the UN workshop that drafted a report on the human right to peace, which was subsequently discussed and further elaborated by the Advisory Committee of the Human Rights Council. He is also a signatory of the Declaración de Bilbao and Declaración de Santiago de Compostela on the Human Right to Peace. He served as a consultant to the Office of the High Commissioner for Human Rights on the issue of mercenaries.

De Zayas is an expert for civil and political rights and has published nine books on a variety of legal and historical issues, including “United Nations Human Rights Committee Case Law” (together with Jakob th. Möller, N.P. Engel 2009), and has been co-author and co-editor of numerous other books. His scholarly articles in the Max Planck Encyclopedia of Public International Law, Oxford Encyclopedia of Human Rights and Macmillan Encyclopedia of Genocide, encompass the prohibition of aggression, universal jurisdiction, the right to the homeland, mass population transfers, minority rights, refugee law, repatriation, legal aspects of the Spanish Civil War, indefinite detention, Guantanamo and the right to peace.

Apart from his scholarly work in the fields of history and law, de Zayas has published poetry in English, French, German, Spanish, and Dutch, has translated the poetry of Rainer Maria Rilke into English, French, and Spanish, and has translated works by Joseph von Eichendorff. Zayas has published many anti-war poems, including “Beatitudes” in Sam Hamill’s “Poets Against the War”,”Apocalypse” and “Dinosaurs”, published in Esoteric Magazine, “Panem et circensis” published in Esoteric Magazine.  “Manichaean games”, published in Ex Tempore. As a member of the International Rainer Maria Rilke Society of Sierre, Switzerland, de Zayas published the first English-language translation of Rilke’s “Larenopfer“, 90 poems dedicated to Rilke’s homeland of Bohemia and his home city of Prague Zayas has lectured on Rilke in Austria, Germany, Switzerland and Canada.

He has published in the literary journal of the PEN Club Suisse Romande L’Escarpe (renamed 2008 Pages Littéraires) in 2007–08.  A member of International PEN since 1989, he was Secretary-General of the Centre Swiss Romande of PEN PEN Club in 2002–06, and its president 2006–10; 2010-13 he was a member of the centre’s executive committee, and in 2013 was again elected president through 2017. Zayas was coordinator of the three Swiss PEN Centres Switzerland 2008–10, and, again, 2013–14. De Zayas served for fifteen years as president of the United Nations Society of Writers, in Geneva.

He holds both US and Swiss citizenships.