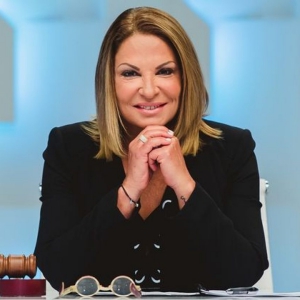 Born in Havana, Cuba in 1959, Polo left Cuba with her family at the age of two and arrived in Miami. Shortly thereafter, her family relocated to Puerto Rico. In 1976, Polo returned to Miami where she obtained a Bachelor’s degree in Political Science at Florida International University and a law degree from the University of Miami. She established a law office in Miami; specializing in

Possessing a special charisma, Polo was called upon by various media outlets to advise audiences in legal matters. On WQBA radio, during journalist Angel Martin’s time slot, she began to answer listeners’ calls on family conflicts.

In 1990, renowned television host, Maria Laria, invited Polo to her TV program as an expert in the area of family law. The extremely popular Cristina Saralegui also saw Polo as someone capable of providing the advice and orientation needed by the public. In December 2000, the international producer of Television Promofilm decided to tum Polo into la jueza (the judge) on the popular television program Caso Cerrado, where she acts as a mediator and arbitrator, and presides over diverse cases and instructs her audience, in simple terms, on the U.S. legal code.