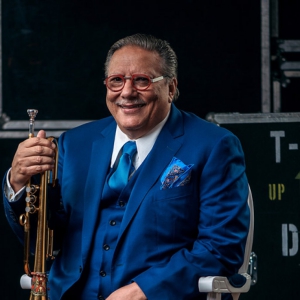 Arturo Sandoval was born in Artemisa, a small town in the outskirts of Havana, Cuba, on November 6, 1949, just two years after Gillespie became the first musician to bring Latin influences into American Jazz. Sandoval began studying classical trumpet at the age of twelve, but it didn’t take him long to catch the excitement of the jazz world. He has since evolved into one of the world’s most acknowledged guardians of jazz trumpet and flugelhorn, as well as a renowned classical artist, pianist and composer.

He is one of the most dynamic and vivacious live performers of our time. Sandoval has been awarded 10 Grammy Awards, and nominated 19 times; he has also received 6 Billboard Awards and an Emmy Award.

Sandoval was a founding member of the Grammy Award-winning group Irakere, whose explosive mixture of jazz, classical, rock and traditional Cuban music caused a sensation throughout the entertainment world. In 1981, he left Irakere to form his own band, which garnered enthusiastic praise from critics and audiences all over the world, and continues to do so. In 1989, Dizzy Gillespie invited Sandoval to be part of the United Nations Orchestra. During a tour with this group, Sandoval visited the American Embassy in Rome to defect from Cuba.

His compositions can be heard in movies including “1001 to 1” starring Beau Bridges, “At Middleton” starring Andy Garcia and Vera Farmiga, Dave Grusin’s soundtrack for “Havana” and “Random Heart”, in the “Mambo Kings” soundtrack with his Grammy nominated composition “Mambo Caliente”, in the soundtrack of “The Perez Family”, “61”, “Mr. Wrong”, the documentary “Oscar”, and “The Family Fuentes” among of others. He also was commissioned by the Kennedy Center to compose the music for the ballet “Pepito’s Story”, “Soul Possessed”, as well as “Oman O Men”, and “The Chocolate Hot Nutcracker, choreographed by Debbie Allen. And as mentioned above, he was awarded an Emmy for his composing work on the entire underscore of the HBO movie based on his life, “For Love or Country” starring Andy Garcia.

Sandoval is an emeritus professor at Florida International University.