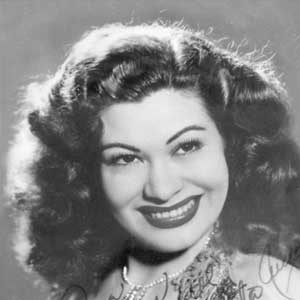 Blanquita Amaro was born in San Antonio de los Baños, Cuba. She was a film actress of the 1940s and early 1950s who starred in the Golden Age of Argentine Cinema. She appeared in some 17 films between 1939 and 1954 appearing often in films involving her native Cuba in co-production with Argentina. She left Cuba for Panama in 1959, and settled there with her husband and manager, Orlando Villegas, and their daughter, Idania. For 10 years, she hosted a daily television program and participated in many benefit shows. In 1968, Amaro moved to Miami where she had her own theater on Southwest 57th Avenue where she starred in “My Husband’s Lover,” with her daughter Idania. She also hosted the TV programs The Blanquita Amaro Show and Say It in Mime, and appeared in numerous shows staged by the Pro Arte Grateli Society.

She also hosted programs at Miami radio stations, such as La Poderosa and Cadena Azúl, for many years. In Miami in 1980, she made her last film, How Hot Miami Is! with Olga Guillot, Raymundo Hidalgo-Gato and Pedro Romàn. She also won plaudits for her performance in the play Stolen Lives, and in the comedy The Close Friends. For 28 years, Amaro presented Cuba Sings and Dances, a variety show directed by her daughter Idania and produced by Manolo del Cañal, her son-in-law, at the Miami-Dade County Auditorium. One of Amaro’s final public appearances was on January 27, 2007, at Miami’s Artime Theater. She received an ovation from the public at a concert by soprano Alina Sánchez, who dedicated the concert to her. Blanquita Amaro died in 2007 in Miami.