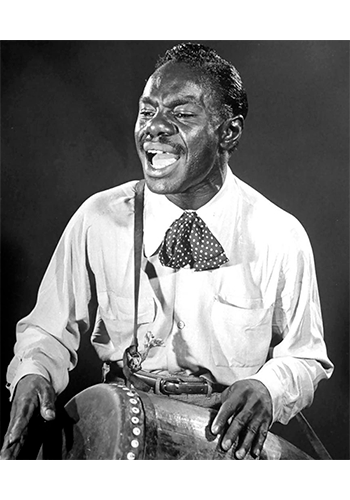 Chano Pozo was born on January 7, 1915 in Havana, Cuba.  He was a Cuban jazz percussionist, singer, dancer, and composer. He played a major role in the founding of Latin jazz. He co-wrote some of Dizzy Gillespie’s Latin-flavored compositions, such as “Manteca” and “Tin Tin Deo,” and was the first Latin percussionist in Gillespie’s band.

Chano showed an early interest in playing drums, and performed ably in Afro-Cuban religious ceremonies in which drumming was a key element. His family lived for many years at El África Solar (Africa neighborhood), a former slave quarters, by all accounts a dangerous place.  In this environment criminal activities flourished, and Chano learned the ways of the street as means of survival. He dropped out of school after the third grade.  He spent his days playing drums, fighting, drinking, and engaging in petty criminal activities, the latter of which landed him a stint in a youth reformatory. At the age of 13, Chano was sent to the reformatory in Guanajay, where he learned reading and writing, auto body repair, and honed his already exceptional skills playing a variety of drums.

To survive, he worked cleaning shoes and selling newspapers. He first performed as a dancer in a Havana troupe known as The Dandy. His brother was the Cuban trumpeter Felix Chapotín. He later worked at the radio station Cadena Azul.

In 1947, he immigrated to the U.S. in search of a better life. He was encouraged to do so by Mario Bauza and his childhood friend Miguelito Valdes. It was Mario Bauza who introduced Chano to Dizzy Gillespie who was looking to include a conga player into his musical group. He was featured in Dizzy Gillespie’s Big Band at Carnegie Hall and subsequently on a European tour.

Chano Pozo was shot and killed on December 2, 1948 in the El Rio Bar at 111th St and Lenox Avenue in Harlem.

Pozo is buried in the Colón Cemetery, Havana. 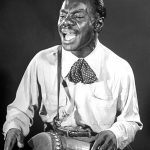