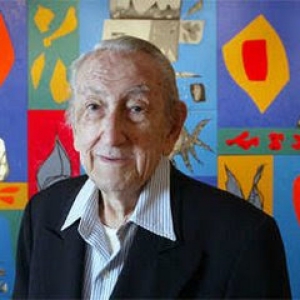 Cundo Bermúdez was born in Havana Cuba in 1914. He was a painter, muralist and printmaker. He is best known for his vividly colored paintings celebrating the themes of his native Cuba. Common themes in his work included landscapes, still lifes, portraits, musicians and interiors. In his later years, he became increasingly interested in abstraction and often included surreal imagery such as clocks, ladders, turbaned figures, and obscure script and symbols, in his works.

Bermúdez studied painting in the 1930s at the Escuela Nacional de Bellas Artes San Alejandro, Cuba’s oldest and most prestigious fine arts school. He also studied briefly at the Academia de San Carlos in Mexico City (1938) where he became familiar with the murals of Mexican modernist artist Diego Rivera and befriended artist Rufino Tamayo. Upon his return to Cuba, he began a successful career as an artist and was featured in a number of exhibitions in Havana.

By the 1940s-1950s, Bermúdez had reached international recognition through exhibitions in New York (at the Museum of Modern Art), Mexico City, Buenos Aires, São Paulo, Paris, and Munich. In the 1960s, he became disillusioned with the Cuban government of Fidel Castro and emigrated to Puerto Rico where he lived for nearly 30 years.

In 1996, he moved to Miami, Florida, where he lived the remainder of his life. He died in 2008 at the age of 94. There is a Cundo Bermudez Museum & Gallery in Hialeah, Florida.