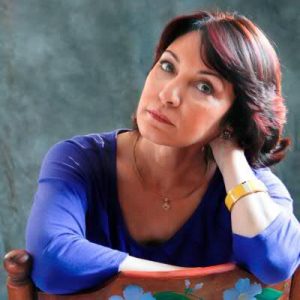 Daína Chaviano was born in Havana, Cuba.  In 1979 she received the David Prize for Science Fiction for Los mundos que amo (1980).  After this, she published Amoroso planeta (1982), Historias de hadas para adultos (1986), Fábulas de una abuela extraterrestre (1988), and El abrevadero de los dinosaurios (1990).  She worked as a screenwriter for television shows for children, youths, and adults.  She was a TV and radio emcee and acted in some independent films.  She lives in Miami, Florida since 1991.

Outside Cuba she has published Pais de dragones, a short-story collection for young adults; a poetry book, Confesionses eróticas y otros hechizos; and the series of novels “The Occult side of Habana.”