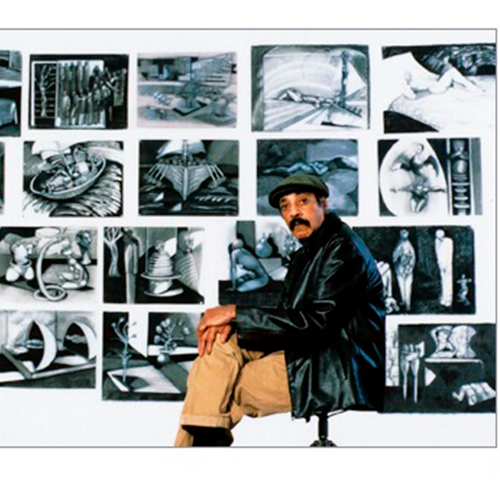 Emilio Cruz was born on March 15, 1938 in the Bronx, New York.  An African-American born of Cuban descent, his continued deliberation on the mythic dimensions of human experience and expression carried through his multiple identities and activities as visual artist, poet, playwright and musician.

He studied at the Art Students League and The New School in New York City, and finally at the Seong Moy School of Painting and Graphic Arts in Provincetown, Massachusetts. As a young artist in the 1960s, Cruz was connected with other artists who were applying abstract expressionism concepts to figurative art such as Lester Johnson, Bob Thompson and Jan Muller. He combined human and animal figures with imagery from archaeology and natural history to create disturbing, dreamlike paintings. Cruz received a John Hay Whitney Fellowship and awards from the Joan Mitchell Foundation and from the National Endowment for the Arts.

In the late 1968, Emilio and wife Patricia Cruz moved to St. Louis to work with Julius Hemphill and the Black Artists Group. He served as director for the visual arts program, which also included painters Oliver Jackson and Manuel Hughes. In addition to artistic contributions, the couple participated in city-wide civil rights protests and rent strikes.

Cruz moved to Chicago and taught at the School of the Art Institute of Chicago during the 1970s, where he exhibited widely and was represented by the Walter Kelly Gallery. He wrote two plays, Homeostasis: Once More the Scorpion and The Absence Held Fast to Its Presence. These were first performed at the Open Eye Theater in New York in 1981, and later were included in the World Theater Festival in Nancy and Paris, France and in Italy. In 1982, he returned to New York where he began to exhibit again. In the late 1980s, he resumed teaching at the Pratt Institute and at New York University.

Cruz exhibited nationally and internationally and is represented in numerous museum collections, including the Museum of Modern Art, the Brooklyn Museum, The Studio Museum in Harlem, New York; the National Museum of American Art and the Hirshhorn Museum of Art, Washington D.C.; the Albright Knox Museum, Buffalo, New York; and the Wadsworth Antheneum, Hartford, Connecticut. 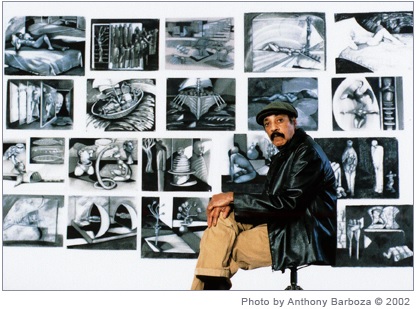