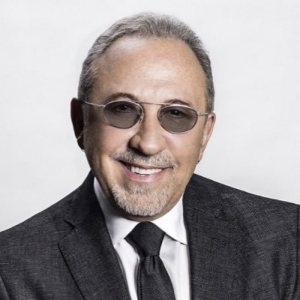 Emilio Estefan is a Cuban-American musician and producer who has won 19 Grammy Awards. Estefan first came to prominence as a member of the Miami Sound Machine. He is the husband of singer Gloria Estefan.

He has produced various events for both general market and Hispanic market television. These events include: The Latin Grammys, The Hispanic Heritage Awards, Nuestra Navidad, and high-profile productions on HBO and Showtime. He has also produced many musical events at the White House.

Estefan is credited with launching the successful careers of many Hispanic musicians and producing many songs for renowned performers such as Ricky Martin, Marc Anthony and Shakira.

Estefan sits as the second vice-chair to the Commission for the National Museum of the American Latino, a bi-partisan commission charged with exploring the possibility of creating a National Latino Museum in Washington D.C.

Emilio Estefan owns a number of business establishments, including several Cuban-themed restaurants­Bongos Cuban Cafe and Larios on the Beach. They also own two hotels: Costa d’Este in Vero Beach which opened in 2008, and The Cardozo in Miami Beach.In June 2009, Estefan and his wife became the first Hispanics to buy a minor ownership stake in an NFL team, the Miami Dolphins.

Also, in 2002, he was appointed to the President’s Committee on the Arts and Humanities by President George W. Bush. He has received many awards including honorary doctoral degrees from Barry University, the University of Miami, Florida International University and the Berklee College of Music, the Ellis Island Medal of Honor, in 2009. In 2005, a star on the Hollywood Walk of Fame. At the Latin Grammy Awards of 2000, he received the award for Producer of the Year.

In November 2015, President Barack Obama awarded Estefan, along with his wife Gloria, the nation’s highest civilian honor, the Presidential Medal of Freedom.