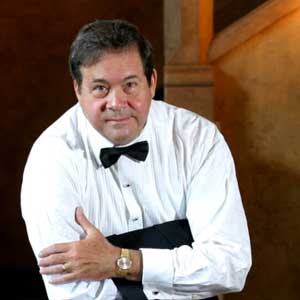 Enrique Chia was born in Cienfuegos, Cuba, where he studied piano with Maestro Jose Manuel Suarez of the Conservatory of Music of Havana.  He left Cuba in 1961 to attend college at Georgia Tech where he obtained his master’s and PhD degrees in metallurgy.  He kept playing piano for small gatherings while working at Southwire company and teaching at Tech as an adjunct professor.  In 1990 he became Executive Vice President and Chief Operation Officer of American Fine Wire company until 1996.  He has been granted 46 U.S. patents for his research work.

Chia’s music was private until he recorded a cassette at the insistence of his father in law who wanted to make copies for family and friends.  The tape was played at shop in Miami and was so well received by the public that he continued recording.  Initially performing on benefit concerts, he now regularly performs thought the U.S. and Latin America.  He received a nomination for a Grammy award for his recording “the Music of Ernesto Lecuona.”