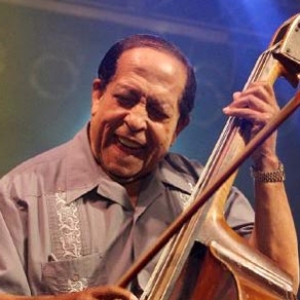 Israel López Valdés, born on September 14, 1918, better known as Cachao was a Cuban double bassist and composer. Cachao is widely known as the co-creator of the mambo and a master of the descarga (improvised jam sessions). Throughout his career he also performed and recorded in a variety of music styles ranging from classical music to salsa. An exile in the United States since the 1960s, he only achieved international fame following a career revival in the 1990s.

Born into a family of musicians in Havana, Cachao and his older brother Orestes were the driving force behind one of Cuba’s most prolific charangas, Arcaño y sus Maravillas. As members of the Maravillas, Cachao and Orestes pioneered a new form of ballroom music derived from the danzón, the danzón-mambo, which subsequently developed into an international genre, mambo. In the 1950s, Cachao became famous for popularizing improvised jam sessions known as descargas. He emigrated to Spain in 1961, and moved to the United States in 1963, starting a career as a session and live musician for a variety of bands in New York during the rise of boogaloo, and later, salsa.

In the 1990s, he was re-discovered by actor Andy García, who brought him back to the forefront of the Latin music scene with the release of a documentary and several albums. Before his death in 2008, Cachao had earned a star on the Hollywood Walk of Fame and several Grammy Awards. He is ranked number 24 on Bass Player magazine’s list of “The 100 Greatest Bass Players of All Time”.