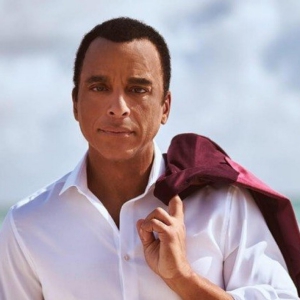 Jon Secada is a Grammy Award-winning Cuban-American singer and songwriter.

He was born in Havana, Cuba in 1962. Secada arrived with his parents in the United States at the age of nine. While attending school, his family managed a coffee shop. After graduating from Hialeah High School, Secada enrolled at the University of Miami where he became an accomplished jazz musician. He completed a Bachelor’s degree in Music and a Master’s degree in Jazz Vocal Performance. Simultaneously, he began developing as a songwriter.

Growing up in the culturally diverse city of Miami, he was exposed to many different sounds. Although salsa, merengue and tropical rhythms filled the radio airways, Secada developed a passion for R&B. Secada’s music is an eclectic fusion of all these sounds, with a bit of funk, soul and undertones of Latin percussion.

In the late I 980’s, Secada met Gloria and Emilio Estefan, Jr., who invited him to join Gloria’s band as a background singer. Shortly thereafter, the group realized his potential and he quickly became a valuable addition to the group. His incredible talent as a songwriter became evident when he started composing music including some of Gloria’s best ballads.

He is a Grammy award winning recording artist, a dynamic live performer, a talented, insightful, songwriter, Secada is an international superstar in his own right. He’s performed with opera legend Luciano Pavarotti and recorded a duet with the late Frank Sinatra on The Best Is Yet to Come from Sinatra’s Duets II album.

Secada was appointed by President Bush to serve on his Advisory Commission on Educational Excellence for  Hispanic Americans. This committee is charged with creating a multi-year action plan aimed at closing the educational achievement gap between Hispanic students and their peers.

His commitment to education and helping others lead him to create the Jon Secada Music Scholarship at the University of Miami.