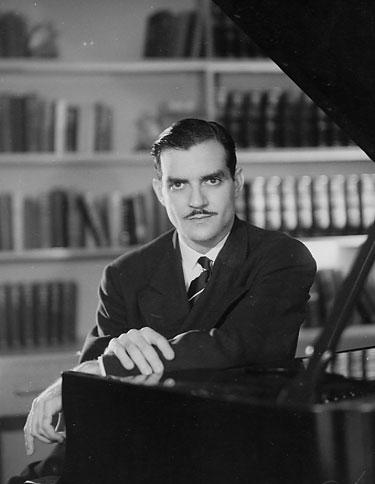 Jorge Bolet was born on November 15, 1914 in Habana, Cuba.  He was a virtuoso pianist and teacher.

Bolet began studying the piano under the tutelage of his sister when he was five. At ten, he was a featured soloist with the Havana Sinfónica. Two years later, he received a scholarship from the Curtis Institute of Music in Philadelphia. Bolet returned to Cuba when he graduated from the Institute in 1934.

After graduation from the Curtis Institute, the Cuban government sent Bolet to Europe to continue his training. He also began his concert career with performances in Amsterdam, Vienna, Berlin, Paris, and London. In 1937, he won the Naumburg Competition, a competition for young pianists (ages 17 to 32), organized in New York City since 1926. It is one of the oldest music competitions in the world, and it has helped launch the career of some of the 20th century’s greatest pianists.  That year, he also made his North American debut with the Philadelphia Orchestra.

In 1942, Bolet joined the US Army and became an American citizen. He was sent to Japan as part of the Army of Occupation. While there, he conducted the Japanese premiere of The Mikado. He made his first recordings for the Boston label which published recital recordings in 1952. He excelled in Piano Concerto No. 2 Op. 16 of Sergei Prokofiev with the Cincinnati Symphony Orchestra recorded for Don Gabor’s Remington label. He also performed the Four Scherzi of Frederic Chopin, also recorded by Remington. These recordings were made in the Fall of 1953.

From 1968 to 1977, Bolet was Professor of Music (piano) at Indiana University. In 1977, Bolet became Head of Piano at the Curtis Institute, succeeding Rudolf Serkin, but he resigned from this post to concentrate on his performing career.

The Decca/London record company put him under contract in 1978, giving the 64-year-old Bolet his first systematic exposure to life at a major international label. Recordings of key sections of his repertoire were made from 1978 up to his death.

Bolet is particularly well remembered for his performances and recordings of large-scale Romantic music, particularly works by Franz Liszt, César Franck, and Frédéric Chopin. He also specialized in piano transcriptions and unusual repertoire, including the fiendishly difficult works of Godowsky, many of which Bolet had studied with the composer himself.

Bolet’s health began to decline in 1988 and, in 1989, he underwent a brain operation from which he never fully recovered. He died on October 16, 1990 in Mountain View, California.