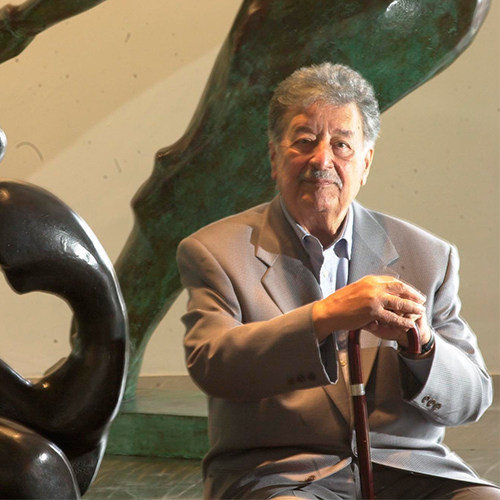 Manuel Carbonell was born on October 25, 1918 in Sancti Spíritus, Cuba.  The family history had its roots in early sugar farming, from the early 1800s.  At an early age, the family moved to the city of Cienfuegos and Carbonell went to study at “Monserrat” a primary school in the city. Since his early childhood he was recognized for his interest in drawings and carvings. Continuing on to his more formative academic years, in Havana he attended El Colegio de Belen, a Jesuit Preparatory School, where he excelled in the classes involving art and history.

In 1937, he learned about “San Alejandro,” the renowned Escuela Nacional de Bellas Artes (National Academy of Fine Arts) in Havana.  The school wanted him to go through a preliminary process for two years prior to attending, however he managed to prove himself with a clay carving that he had made that following weekend and they accepted him as a student on the spot. Carbonell was eighteen years old and barely beginning at San Alejandro when he fell down some stairs. The injury was very severe; one of his kidneys ruptured as a result of the impact. He spent nearly one year partly paralyzed and couldn’t attend classes.  Little by little he learned to walk again and was eventually able to return to San Alejandro. At the Academy, Carbonell studied under the guidance of Juan José Sicre, a former student of Antoine Bourdelle, Rodin’s favorite disciple.  In 1945, at the age of 27, Carbonell graduated with the title of Professor of Drawing and Sculpture. Carbonell met and worked alongside great artists such as Fidelio Ponce, Victor Manuel, Amelia Pelaez,Roberto Estopiñan and many more.

His classical and religious period developed between 1945 and 1959.  Some of his many important commissions included the stone carvings as bas-reliefs of the Twelve Stations of the Cross, along with The Last Rites located at Las Lomas Del Jacan in San Miguel de los Baños, Matanzas province. Last Rites, was exhibited at the National Capitol in Havana. He also sculpted a statue of the Virgin Mary for the Association of Catholic University students in Havana.  A life size wood carving of a crucifixion for the chapel at the Covadonga sugar mill in Las Villas, Cuba.

For the first commercial television broadcast, “Union Radio Television”, Carbonell was the host and interviewer for a weekly television program where he interviewed artists.  He worked in various aspects of television and production whereby he won an award in set design for the ‘Union De La Cronica Tele-Radial Diaria” in the second festival. By 1954, Carbonell traveled to Europe visiting countless museums.  Europe proved to inspire Carbonell as he studied the art of the Impressionist and Abstract artists, which inspired a change in direction to give form a sense of movement.

In 1959, Carbonell fled Cuba where he could no longer live under a totalitarian regime. Leaving behind his wealth, his established positions, his sculptures, and most importantly his family. He arrived in New York City with only his tremendous talent and $200 in cash and initially took up residency at the YMCA.  Shortly after in 1961, Manuel Carbonell was introduced to Dr. Fred Schoneman, the influential and renowned gallery owner, who was impressed with what he saw of Carbonell’s work, and invited him to become the gallery’s first and only sculptor.  The gallery exhibited Carbonell’s sculptures alongside European Masters and French Impressionist paintings of the 19th and 20th centuries, such as Braque, Chagall, Monet, Degas, Pissarro, Picasso, Gauguin, Renior and others.

In 1976, Carbonell created the “Bicentennial Eagle”, which he gifted to the United States, during a ceremony on the West Lawn of the White House in honor of the nation’s Bicentennial Anniversary. During the celebrations, the sculpture was on display in the Great Hall of Commerce in Washington D.C. This sculpture is now part of The Gerald R. Ford, Presidential Library, Ann Arbor, Michigan, which is technically a branch office of The National Archives and Records Administration Collection, that the Federal government oversees.

By 1987 the Beaux Arts Gallery in Miami, Florida, became the exclusive worldwide representative of Carbonell’s work, under the Owner/Director, Ricardo J. Gonzalez III, an architect and Carbonell’s nephew.

Carbonell was selected in a competition in 1992, to create one of the largest bronze monuments in the State of Florida, the artwork for Miami’s Brickell Avenue Bridge.  He created the 53-foot bronze public monument, “The Pillar of History and the Tequesta Family.” located mid-span on the bridge. The pillar illustrates a carved graphical narration of the lives of the Tequesta Indians, Miami’s first inhabitants, featuring 150 figures.  His modern monumental works, created in his unique and distinctive personal style, are part of important art collections and public spaces.   “Couple in Love” adorns the lobby of the Mandarin Oriental Hotel, Miami, “Lovers” is located at the entrance of the Carbonell Condominium, named in the artist honor, “Torso” formally at Selby’s Five Point Park, downtown Sarasota then at the von Liebig Art Center in Naples, Florida. “New Generation” is in Xujianhui Park, Shanghai, China. The sculpture of ” Amantes” now graces the grounds of The Buenaventura Golf and Beach Resort Panama, under the Autograph Collection of J.W. Marriott, Republic of Panama. “Abrazo” and “Couple in Love” enhance the first Ritz Carlton Hotel, in Bangalore, India. “Mother and Child” together with “Amantes” are amongst the garden of Château de Vullierens, Vullierens, Switzerland, and “Birth of Eve” at the entrance rotunda of Brickell Key Two Condominium, Miami, Florida.

Manuel Carbonell died at Kindred Hospital in Coral Gables, Florida, on November 10, 2011, at the age of 93. 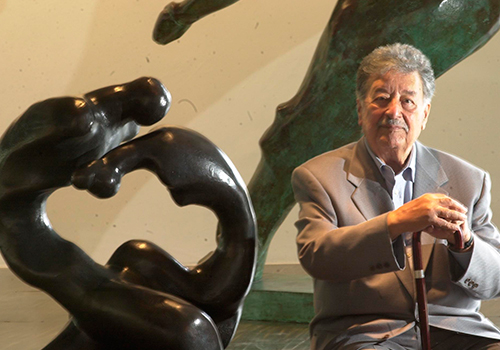