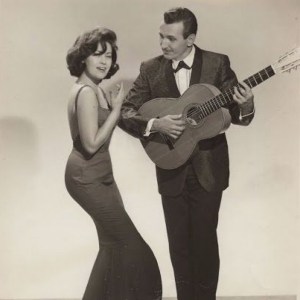 Olga and Tony Alvarez Chorens known as Olga and Tony began their careers separately. Olga started singing at 11 years of age in programs for children’s radio station García Serra. Later she competed in the Supreme Court of Art, winning numerous contests.  At the time Tony Alvarez was leading a radio program “Ritmos del Plata.”. The two met and join the Orchestra Rio De La Plata.”  They were were married in 1945 and three months later, left Cuba on a tour that took five years throughout Latin America. On his return to Havana they became a duo, starring Ronda Musical Coca Cola, a live radio program for over 7 years.  Simultaneously, in 1951, Olga and Tony became stars of the CMQ Television, host of “El Show de Olga y Tony.”

Olga and Tony Alvarez Chorens went into exile in 1963, to Mexico, and then to the U.S. They worked in New York at important venues of the time: The Teatro San Juan, Hotel Great Northern, the Alameda Room and Liborio and in Channel 2, Telemundo in Puerto Rico.  After nearly 15 years of success on the small screen of Puerto Rico, with its programs on Channel 7 and Channel 11, they moved to Spain where he worked in nightclubs for a year, returning to Miami, to make back their television broadcasts on Channel 51,  Hit TV and Telemiami. Tony passed away in 2001.  They are the parents of famous composer and singer Lissette, married to singer Willy Chirino.