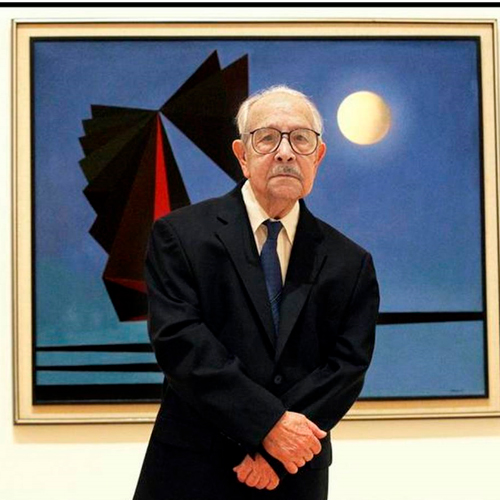 Rafael Soriano was born on November 23, 1920 in Matanzas, Cuba.  He studied at the San Alejandro Art Academy in Havana. During his studies, he met the critic José Gómez-Sicre and painters Víctor Manuel and Fidelio Ponce.  He graduated in 1941 as Professor of Painting, Drawing and Sculpture. He then returned to Matanzas where he taught visual arts for almost two decades.  He was a co-founder, and later Director, of the Escuela de Bellas Artes de Matanzas, the most important art school in Cuba outside of Havana. He was one of the major Latin American artists of his generation and one of the premier painters of Cuba.

Soriano avoided vernacular themes which dominated Cuban art from its emergence with the first Vanguard in the mid-twenties. His work proceeded along the paths of geometric abstraction in the course of 1950’s, and was a part of the Ten Concrete Geometric painters, but by the late 1960’s, Soriano’s work took a radical turn. His brush began to create amazing shapes; abstract expressions related to the emotions, feelings, meditations and mystical introspections. A novel treatment of light and color, transparencies and forms placed Soriano in a new aesthetic dimension and freed him from his earlier attachments to schools and tendencies. Through a highly refined technique, he became a master of luminosity, of the pictorial metaphor and of the metaphysical language of forms. In his amazing and highly complex images, light acts as both form and content. It is this unity of purpose and means of representation that constitutes Soriano’s transcendental contribution to contemporary visual discourse and elevates his artistic creation to universal rank.

In 1962 Soriano went into exile, settling in Miami with his wife Milagros and his daughter Hortensia. He worked as a graphic designer and occasionally taught, first at the Catholic Welfare Bureau, and later at the Cuban Cultural Program of the University of Miami. He continued to paint tirelessly in the evenings.

Rafael Soriano died on April 9, 2015 in Miami, Florida.  His family created the Rafael Soriano Foundation in order to encourage a deeper appreciation of his artwork as one of the major Latin American Artist of his time. The foundation promotes his work in order to be placed in museums and collections around the globe and maintain a database cataloguing all his works.  The foundation donated two major paintings to the Smithsonian Art Museum: Candor de la Alborada (Candor of Dawn) 1994 and Un Lugar Distante (A Distant Place) 1972.