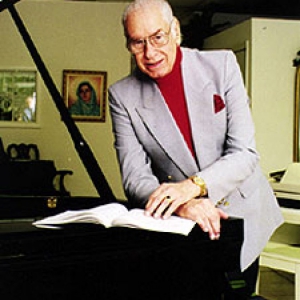 René Touzet was born in the Havana town of Cojimar.  A pianist and composer, he studied in Havana with the maestros Pérez Sentenat and Joaquín Nin, and at the age of 16 he won the prestigious first prize of the Falcón Conservatory. Very soon he created his own orchestra, with which he performed for years at the National Hotel in Havana, until in 1946 he joined Enrique Madriguera in the United States. Then he moved to Hollywood and created his own combo, the Cha Cha Rhythm Boys, with which he recorded several albums. He also played with the orchestras of Xavier Cugat and Desi Arnaz.  René Touzet, is the author of more than five hundred songs and immortal boleros like La noche de anoche.  His compositions were precursors of the movement of “feeling.”  His unforgettable song, “No te importe saber” was popularized by Frank Sinatra, who sang it in English as “Let me love you tonight.” Another of his famous works, The crazy cha-cha-chá, was the inspiration of the Louie Louie that Richard Berry composed and brought to fame.  In 1972 Touzet retired from performing popular music and moved to Miami, devoting his remaining years to composing for the piano, in a style blending Cuban folk music and jazz with classical music. He passed away in 2003 in Miami.