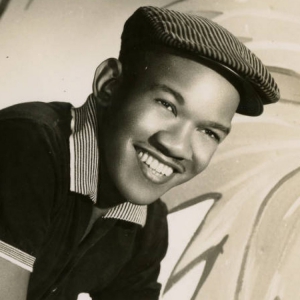 Rolando Laserie was born in Santa Clara, Las Villas.   He started out as a percussionist — he was one of the original members of Beny More’s group. In 1956 he had the opportunity to record a ballad by Mario Fernandez Porta called “Mentiras Tuyas,” which he transformed with his distinctively hard sound and the record sold 30,000 copies in the first few days after its release. He moved to MexiCo in 1960 and thence to New York and Miami. He recorded in New York with Tito Puente and his band in the for an album called “Pachanga in New York” and with the great Puerto Rican band Cortijo y Su Combo, singing with Ismael Rivera. He continued to have hits, including “Amalia Batista,” now a Latin standard.

He added tangos to his repertory, and his frequent interjection “De película!” (“From a movie!”) became his trademark. He was nicknamed “El Guapo de la Canción.”  In the 1970’s he moved to Florida, and in the 80’s he recorded with Johnny Pacheco on Fania Records. He also began recording with Caiman Records, which produced the fine album “Ay, Se Pasó La Serie,” recorded in 1985 in a modern Cuban style.  Laserie passed away in Miami in 1998.