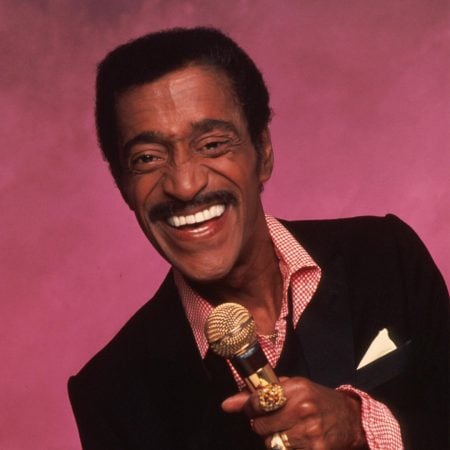 Sammy Davis Jr. was born on December 8, 1925 in New York City.  He was the son of African-American entertainer and stage performer Sammy Davis Sr. (1900–1988) and to tap dancer and stage performer Elvera Sanchez (1905–2000).  During his lifetime, Davis stated that his mother was Puerto Rican and born in San Juan. However, in the 2003 biography In Black and White, author Wil Haygood wrote that Davis’s mother was born in New York City to Cuban parents who were of Afro-Cuban and Spanish descent, and that Davis claimed he was Puerto Rican because he feared anti-Cuban backlash would hurt his record sales.  As an infant, he was reared by his paternal grandmother. When he was three years old, his parents separated. His father, not wanting to lose custody of his son, took him on tour. Davis learned to dance from his father and his godfather Will Mastin. Davis joined the act as a child, and they became the Will Mastin Trio.

In 1943, during World War II, Davis was drafted into the U.S. Army at age 18.  He was frequently abused by white soldiers from the South.  He was reassigned to the Army’s Special Services branch, which put on performances for troops.  At one show he found himself performing in front of soldiers who had previously racially abused him.  Davis, who earned the American Campaign Medal and World War II Victory Medal, was discharged in 1945 with the rank of private.

After his discharge, Davis rejoined the family dance act, which played at clubs around Portland, Oregon. He also recorded blues songs for Capitol Records in 1949 under the pseudonyms Shorty Muggins and Charlie Green.  On March 23, 1951, the Will Mastin Trio appeared at Ciro’s as the opening act for headliner Janis Paige. They were to perform for only 20 minutes, but the reaction from the celebrity-filled crowd was so enthusiastic, especially when Davis launched into his impressions, that they performed for nearly an hour, and Paige insisted the order of the show be flipped. Davis began to achieve success on his own and was singled out for praise by critics, releasing several albums.

In 1953, Davis was offered his own television show on ABC, Three for the Road—with the Will Mastin Trio. The network spent $20,000 filming the pilot, which presented African Americans as struggling musicians, not slapstick comedy or the stereotypical mammy roles of the time. The cast included Frances Davis, who was the first black ballerina to perform for the Paris Opera, actresses Ruth Attaway and Jane White, and Federick O’Neal, who founded the American Negro Theater. The network could not get a sponsor, so the show was dropped.

In 1954, Davis was hired to sing the title song for the Universal Pictures film Six Bridges to Cross. In 1956, he starred in the Broadway musical Mr. Wonderful with Chita Rivera.  He returned to the stage in 1964 in a musical adaptation of Clifford Odets’ Golden Boy opposite Paula Wayne. Davis was nominated for a Tony Award for his performance and the show was said to have featured the first interracial kiss on Broadway.

In 1959, Davis became a member of the Rat Pack, led by his friend Frank Sinatra, which included fellow performers Dean Martin, Joey Bishop, and Peter Lawford, a brother-in-law of John F. Kennedy. Initially, Sinatra called the gathering “the Clan”, but Davis voiced his opposition, saying that it reminded people of the Ku Klux Klan. Sinatra renamed the group “the Summit”. One long night of poker that went on into the early morning saw the men drunken and disheveled. As Angie Dickinson approached the group, she said, “You all look like a pack of rats.” The nickname caught on, and they were then called the Rat Pack, the name of the earlier group led by Humphrey Bogart and his wife, Lauren Bacall, who originally made the remark about the “pack of rats” they associated with.

The group around Sinatra made several movies together, including Ocean’s 11 (1960), Sergeants 3 (1962), and Robin and the 7 Hoods (1964), and they performed onstage together in Las Vegas. In 1964, Davis was the first African American to sing at the Copacabana night club in New York.

In 1966, he had his own TV variety show, titled The Sammy Davis Jr. Show. While Davis’s career slowed in the late 1960s, his biggest hit, “The Candy Man”, reached the top of the Billboard Hot 100 in June 1972, and he became a star in Las Vegas, earning him the nickname “Mister Show Business.”

After reuniting with Frank Sinatra and Dean Martin in 1987, Davis toured with them and Liza Minnelli internationally.

In August 1989, Davis began to develop symptoms: a tickle in his throat and an inability to taste food. Doctors found a cancerous tumor in Davis’s throat. He had often smoked four packs of cigarettes a day as an adult. When told that surgery (laryngectomy) offered him the best chance of survival, Davis replied he would rather keep his voice than have a part of his throat removed; he was initially treated with a combination of chemotherapy and radiation. His larynx was later removed when his cancer recurred. He was released from the hospital on March 13, 1990.

Davis died of complications from throat cancer two months later at his home in Beverly Hills, California, on May 16, 1990, at age 64. He was buried at Forest Lawn Memorial Park in Glendale, California.

Davis was awarded the Spingarn Medal by the NAACP and was nominated for a Golden Globe Award and an Emmy Award for his television performances. He was a recipient of the Kennedy Center Honors in 1987, and in 2001, he was posthumously awarded the Grammy Lifetime Achievement Award.