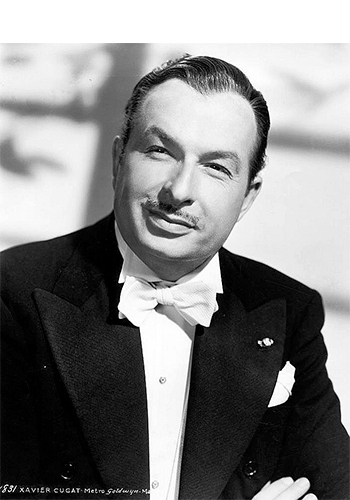 Xavier Cugat was born Francisco de Asís Javier Cugat Mingall de Bru y Deulofeu on January 1, 1900 in Girona, Catalonia, Spain.  His family emigrated to Cuba when he was three years old. He studied classical violin and worked as a violinist at the age of nine in a silent movie theater to help pay for his education. He was first chair violinist for the Teatro Nacional Symphonic Orchestra. When he wasn’t performing, he was drawing caricatures. On July 6, 1915 he and his family arrived in New York City on the SS Havana. Cugat appeared in recitals with Enrico Caruso, playing violin solos.

In the 1920s, he led a band that played often at the Cocoanut Grove, a club in Los Angeles. Seeing how popular his tango performances were becoming, Cugat convinced the owner to hire South American dancers to give tango lessons. This, too, became popular, and Cugat made the dancers part of his orchestra. In 1928, he turned his act into the film Xavier Cugat and His Gigolos.

In 1931, Cugat took his band to New York for the opening of the Waldorf–Astoria hotel. He replaced Jack Denny as leader of the hotel’s resident band. For sixteen years, he led the Waldorf–Astoria Orchestra, shuttling between New York and Los Angeles for most of the next 30 years.

Cugat recorded for Columbia (1940s and 1950s, and Epic), RCA Victor (1930s and 1950s), Mercury (1951–52 and the 1960s), and Decca (1960s). Dinah Shore made her first recordings as a vocalist with Cugat in 1939 and 1940 for RCA Victor. In 1940 his recording of “Perfidia” became a hit. Cugat followed trends closely, making records for the conga, the mambo, the cha-cha-cha, and the twist when these dances were popular. Several songs that he recorded, including “Perfidia”, were used in the Wong Kar-wai films Days of Being Wild and 2046. In 1943 “Brazil” was Cugat’s most successful chart hit. It spent seven weeks at No. 2 on the Billboard magazine National Best Selling Retail Records.

He also worked for the Los Angeles Times as a cartoonist. His caricatures were nationally syndicated.

Cugat owned and operated the Mexican restaurant Casa Cugat in West Hollywood. The restaurant was frequented by Hollywood celebrities and featured two singing guitarists who would visit each table and play diners’ favorite songs upon request.[9] The restaurant began operations in the 1940s and closed in 1986.

Cugat spent his last years in Barcelona, Catalonia, Spain, living in a suite at Hotel Ritz. He died of heart failure at age 90 in Barcelona and was buried in his native Girona. He was posthumously inducted into the International Latin Music Hall of Fame in 2001. 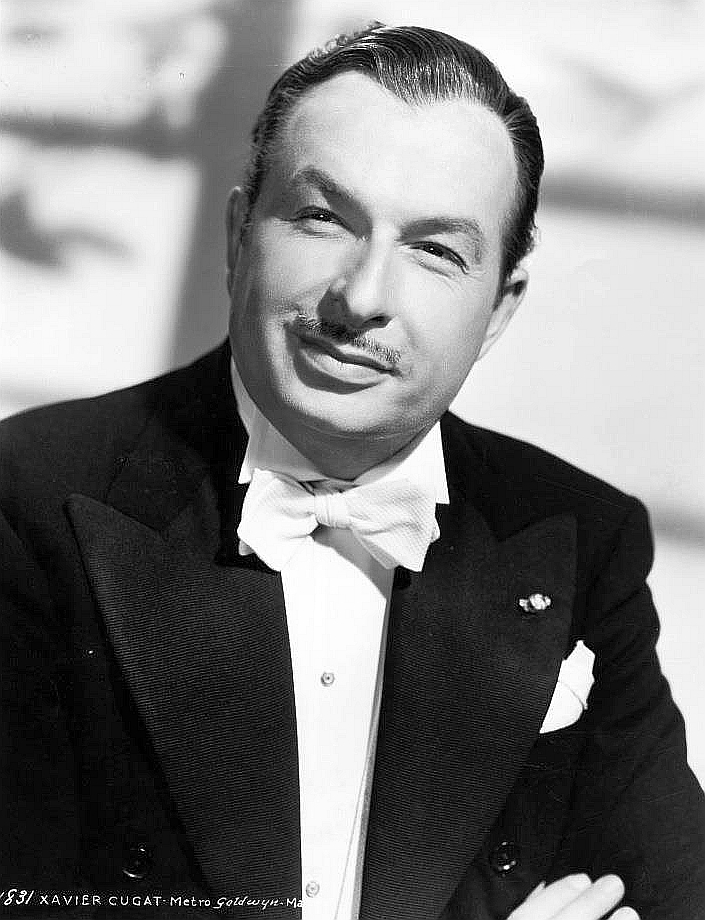