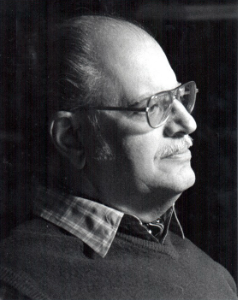 Aurelio de la Vega, composer, and musicologist was born in Havana, Cuba. After studying with Ernst Toch in California (1947-1948), he occupied relevant positions in Cuba, toured the United States as lecturer (1952-1954) and settled in Los Angeles in 1959, where he was very active as composer and lecturer. From 1959-1992 he was Professor of Music and Director of the Electronic Music Studio at California State University, Northridge. In 1971 he was awarded the Outstanding Professor Award of the entire California State University system and is a Distinguished Emeritus Professor of said University.

He has lectured extensively in Cuba, the United States, Mexico, Puerto Rico, Venezuela, Brazil, Canada, Spain, Argentina, and Chile, mainly on contemporary music, on electronic music and on the art of Latin America.

The recipient of numerous prizes, commissions, awards, and distinctions among them the Virginia Colliers Chamber Music Award, 1955; Andrew Mellon Fellowship, 1963; Certificate of Recognition, City of Los Angeles Cultural Affairs Department, 2000; and the Warren Lifetime Achievement Award from the Cintas Foundation, 2010. His “Variación del Recuerdo (“Variation on the Remembrance”) for string orchestra, 1999 received a Latin Grammy nomination in 2009. Commissioning of works include the Los Angeles philharmonic Orchestra 1977; the University of California at San Diego, 1985; and the Moldenhauer Foundation of the Library of Congress, 2006. De la Vega died in Northridge, California on February 12, 2022.