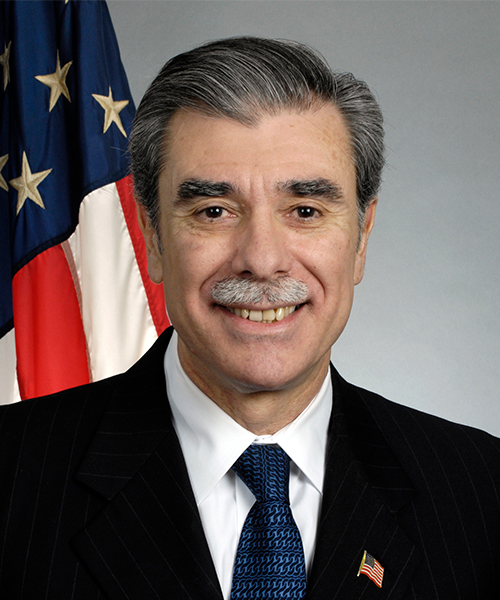 Carlos M. Gutierrez was born on November 4, 1953 in Havana, Cuba.  He was the son of a successful pineapple plantation owner. As such, his father was deemed an enemy of the state by Fidel Castro‘s regime. Faced with the expropriation of their property following the Cuban Revolution, Gutierrez’s family fled for the United States in 1960 and settled in New York and then moved to Mexico.

Gutierrez served as 35th Secretary of the U.S. Department of Commerce, the voice of business in government, from 2005 to 2009. A top priority for Secretary Gutierrez was prying open global markets for U.S. companies so they could continue innovating and competing to build a stronger economy. The Secretary met with foreign government and business leaders to discuss ways to enhance trade and promote U.S. exports. He played a key role in the passage of CAFTA-DR, a landmark agreement that removed trade barriers and expanded export opportunities throughout Latin America.

During his time as Secretary of Commerce, he also served as co-chair for the Commission for Assistance to a Free Cuba.  He was actively involved in U.S. – Cuba policy alongside Co-Chair Secretary of State Condoleezza Rice.  Secretary Gutierrez was also one of President Bush’s point men working with Congress to pass comprehensive immigration legislation, an issue he sees as one of the greatest domestic social issues of our time. He believes a successful immigration solution must focus first on securing U.S. borders, but must also address immigrants’ contribution to our economy and the importance of American unity.

Prior to his government position, he joined Kellogg in Mexico in 1975 as a sales representative and management trainee.  He rose through the management ranks and in January 1990 he was promoted to corporate vice president of product development at the company’s headquarters in Battle Creek, Michigan.  By July of that year, he became executive vice president of Kellogg USA. In January 1999, he was elected to the company’s board of directors. In April, he was appointed president and CEO, becoming the only Latino youngest CEO in the company’s nearly 100-year history.  With Kellogg, he worked in three continents (Americas, Australia, Asia).

Gutierrez was the founder and Chairman of Global Political Strategies (GPS) an international strategic consulting service and a division of APCO Worldwide, a Washington based global communications firm.  In 2010 Gutierrez became a vice chairman of Citigroup in the Institutional Clients Group and member of the Senior Strategic Advisory Group until 2012.

After serving as Chairman of the Stonebridge Group, he is currently Chairman and CEO of Empath.  Empath uses machine learning to identify employee skills, match them to the skills required for a given job (s) and recommends the best way to upskill and reskill.