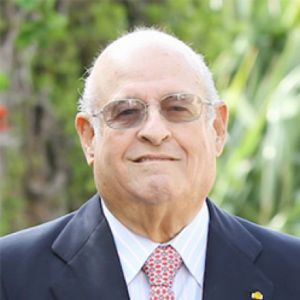 Manuel Jorge Cutillas was the great-great-grandson of Don Facundo. He studied in the U.S. at Tufts University in Boston, Massachusetts and Rensselaer Polytechnic Institute in Troy, New York. After earning a bachelor of science from Rensselaer, Cutillas returned to Santiago de Cuba in 1955 and began work in the family business as an assistant distillery superintendent. He married Rosa María Dubois this same year.
When the Cuban government illegally confiscated without compensation the Cuban assets of Bacardi, Cutillas left on a boat and landed in Miami and eventually went to The Bahamas, the home of Bacardi & Company Limited, the Bacardi flagship office. Cutillas presided over Bacardi & Company Limited, one of Bacardi’s several international offices, from 1977 to 1992. In 1992, Bacardi’s five international operating units – located in Bermuda, The Bahamas, Puerto Rico, the United States, and Mexico – united to become Bacardi Limited, with Manuel Cutillas as president and chief executive officer. The following year Cutillas pursued a path of portfolio diversification by acquiring Martini & Rossi Group.
Under Cutillas, Bacardi grew from a fragmented company to an agile, market-responsive enterprise. By 1995 BACARDI rum, including light, dark, 151, black reserve, and añejo, became the number one selling distilled spirits brand in the United States. The following year, London’s Financial World magazine identified the BACARDI rum trademark as one of the ten most valuable worldwide. From 1997 to 2000, Cutillas continued to influence Bacardi’s future as Chairman of the Board.
Cutillas was awarded the coveted title of Maestro de Ron (Rum Master), a title only awarded to a handful of family members over the company’s more-than-150-year history. In 2012 he collaborated with eight other family maestros de ron to create a rare BACARDI blend for Bacardi’s 150th anniversary. Manuel Jorge passed away November 2, 2013.