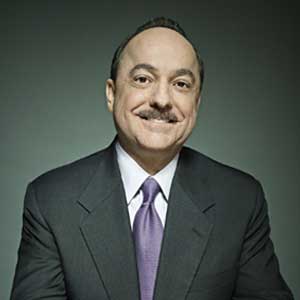 Ralph de la Vega is the founder and chairman of the De La Vega Group, which focuses on investments in entrepreneurial startups. Ralph de la Vega is the former Vice Chairman of AT&T Inc. and CEO of AT&T Business Solutions and AT&T International. He has previously served as President & CEO of AT&T Mobile & Business Solutions; President and CEO of AT&T Mobility; COO of Cingular Wireless; President of BellSouth Latin America Operations; and the President of Broadband and Internet Services for BellSouth.

He is also the author of the 2009 book Obstacles Welcome: How to Turn Adversity to Advantage in Business and Life. Ralph de la Vega retired December 31, 2016, after a 42-year career with the AT&T.

He came to the United States in 1962, at the age of ten by himself because his parents were not allowed to leave the Communist island. His family joined him four years later.

Once he finished high school, he enrolled in a pre-engineering curriculum at Miami Dade College. He later obtained his bachelor’s degree in mechanical engineering from Florida Atlantic University and an MBA from Northern Illinois University.

He also completed the Executive Program at the University of Virginia and received an honorary doctorate from Florida Atlantic.

He was elected Executive of the Year by the Association of Latino Professionals in Finance and Accounting and has been listed as one of America’s “50 Most Important Hispanics in Technology and Business.” In 2011 he was awarded the Emory University’s Global Innovation Award.