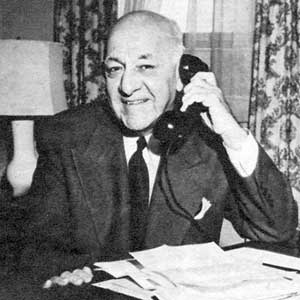 Julio Lobo was a powerful Cuban sugar trader and financier. Lobo was born in Venezuela to a father of Sephardi Jewish descent and a Catholic mother, and grew up in Havana, Cuba. As a young man he studied in the United States, where he graduated from LSU as an agricultural engineer in 1919. That same year he returned to the island and began working with his father in “Galbán Lobo y Compañía”. There he revealed himself as the most brilliant of the executives and the following year when the company was reorganized as “Galbán Lobo Company Importing and Exporting Association” he was appointed as CEO.

When he left Cuba to go into exile in 1960, Lobo was considered the single most powerful sugar broker in the world. His fortune was estimated at close to $200 million. His assets then included 14 sugar mills, over 30,000 acres of land, a bank, an insurance company, and offices in Havana, New York City, London, Madrid, and Manila. He married into an old Cuban aristocratic family, the Montalvo family. Eventually he inherited his father’s trading business and turned it into the world’s largest sugar trading firm. A renowned art connoisseur, Lobo also acquired the largest collection of Napoleonic memorabilia outside France (the collection is housed today in Havana in the former home of Orestes Ferrara, at the Museo Napoleonico). Lobo died in Madrid in 1983.