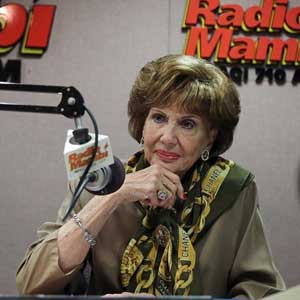 Martha Flores has been the host of La Noche y Usted (The Night and You) on WAQI 1140 AM Radio Mambi in Miami for over 20 years.

Ms. Flores arrived in Miami in 1959 and almost immediately began working at WMIE radio. Since moving to Radio Mambi, her call-in show has been a fixture of late-night talk radio in South Florida.

Ms. Flores has received numerous awards in recognition of her career in journalism. In 2004, she received United Homecare’s Public Awareness/Media Award. In 2014, the Miami-Dade County School Board honored Ms. Flores with a proclamation for a career in journalism that has spanned over 55 years. Passed away on  July 18, 2020.