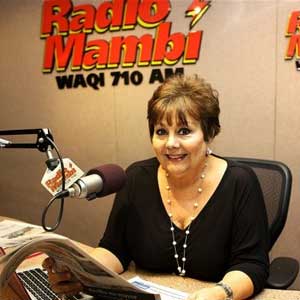 Ninoska Perez Castellon was born in Havana, Cuba in 1950.  Her family fled to Florida in 1959, where they were granted political asylum.  Ninoska was raised in Miami, Florida where she has remained an active member of the Cuban exile community as a prominent radio host, political commentator and journalist.

In 2001, Ninoska and her husband, former political prisoner Roberto Martin Perez, founded the Cuban Liberty Council. The organization is defined as a not-for-profit dedicated to promote liberty and democracy in Cuba.  The CLC’s Directors have played key roles in shaping US policy towards Cuba. Ninoska is also an artist.  She launched a series of paintings, dubbed “Habaneras”, reminiscent of her native Cuba and using whimsical watercolors. She has taken part in several South Florida art festivals including Coral Gables’ Carnival on the Mile and the South Miami Art Festival.