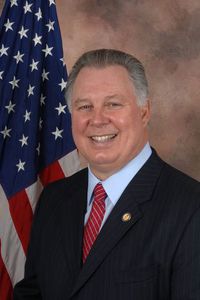 Albio Sires was born on January 26, 1951, in Bejucal, Cuba.  He immigrated to the United States with his family at age 11 with the help of relatives in the United States and eventually settled in West New York, New Jersey.  Congressman Sires became a star basketball player at Memorial High School and received a four-year basketball scholarship from St. Peter’s College where he received a B.A. in Spanish and Marketing in 1974.  He went on to receive a Master’s Degree from Middlebury College in Vermont.

Congressman Sires was a teacher and business owner before entering public service.  He served as Mayor of West New York, New Jersey from 1995 to 2006.  During that time, the Congressman created more affordable housing units than any municipality in the State of New Jersey by fostering public-private partnerships and the use of targeted tax incentives.  He balanced twelve consecutive municipal budgets while maintaining and enhancing vital municipal services.  His efforts were recognized by many, including the New Jersey State Bar Association and Legal Services and his fellow Mayors who named him, “Mayor of the Year” in 2004.

Congressman Sires also served in the New Jersey State Assembly, where he served two terms as Speaker of the Assembly.  As Speaker, Congressman Sires led the effort to create the Office of Lieutenant Governor and the Assembly Committee on Homeland Security and State Preparedness, as well as, raise the minimum wage, expand job training, and fund valuable cancer research.  He also created the STARS I and STARS II program, which offers full county and state college tuition scholarships to thousands of students.  He increased funding for public education by $760 million and helped fund after-school programs to get kids off the streets and away from gangs.

During his first term in the U.S. House of Representatives, Congressman Sires served on the Financial Services Committee.  There he focused on housing, introducing legislation to aid public housing authorities and supporting housing for low-income seniors.

Currently, Congressman Sires serves on three Committees: Foreign Affairs, Transportation and Infrastructure, and Budget.  On the Foreign Affairs Committee, Congressman Sires is the Chairman of the Western Hemisphere Subcommittee and serves on the Europe and Eurasia Subcommittee. He is focused on improving human rights and freedoms across the globe and building international partnerships to improve our nation’s security.

The Congressman serves on two Transportation and Infrastructure Subcommittees: the Highways and Transit Subcommittee as well as the Railroads, Pipelines, and Hazardous Materials Subcommittee.  He is actively involved in reauthorizing the Surface Transportation bill, supporting increased transit and commuting options, safer streets, and more efficient goods movement.

Congressman Sires is a member of both the Democratic Caucus’ Livable Communities Task Force and the Congressional Urban Caucus. He works with the other members of Congress in these groups to promote legislation that focuses on creating safe and more livable communities in which families have equal access to education, economic, housing and transportation opportunities.