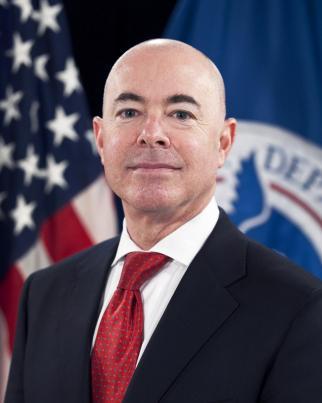 Alejandro Mayorkas was born on November 24, 1959 in Habana, Cuba.  His parents arrived with him and his sister to the United States in 1960 as refugees, following the Cuban Revolution. His father was a Cuban Jew of Sephardic background who owned and operated a steel wool factory in Havana.  His mother was a Romanian Jew whose family escaped the Holocaust and fled to Cuba in the 1940s.  The Cuban Revolution marked the second time his mother would be forced to flee a country she considered home. He lived in Miami, Florida, before his family moved to Los Angeles, California, where he was raised for the remainder of his youth.  Mayorkas grew up in Beverly Hills and attended Beverly Hills High School.

Mayorkas earned his Bachelor of Arts degree with distinction from the University of California, Berkeley, in 1981. He received his Juris Doctor from Loyola Law School in 1985.

After three years as a litigation associate in private practice, Mayorkas became an Assistant United States Attorney in the Central District of California in 1989. He prosecuted a wide array of federal crimes, developing a specialization in the prosecution of white-collar crime. His prosecutions included the successful prosecution of Operation PolarCap, then the largest money laundering case in the nation; the conviction at trial of Heidi Fleiss on charges of federal conspiracy, tax fraud, and money laundering charges; the successful prosecutions of two largest telemarketing fraud operations that preyed on the elderly; and the successful prosecution of a health care fraud and insurance fraud conspiracy.  Mayorkas served as the coordinator of the Southern California Telemarketing Fraud Task Force, overseeing the coordination of federal, state, and local law enforcement and regulatory agencies to most aggressively combat telemarketing fraud throughout the Central District of California.

In September 2001, Mayorkas joined O’Melveny & Myers as a litigation partner.  In 2008, The National Law Journal named Mayorkas one of the “50 Most Influential Minority Lawyers in America.”

In 2009, Mayorkas was appointed by President Obama as the director of U.S. Citizenship and Immigration Services (USCIS). As CIS director, Mayorkas championed United States citizenship, management efficiencies and fiscal responsibility, and safeguarding the integrity of the immigration system. He implemented the Deferred Action for Childhood Arrivals (DACA) process in 60 days.  He led U.S. government efforts to rescue orphaned children following the January 2010 earthquake in Haiti and led the advancement of a crime victims’ unit that, for the first time, resulted in the ability of the agency to administer the statutory maximum number of visas to victims of crime.

For his work as director of USCIS, Mayorkas received awards from the Illinois Coalition for Immigrant and Refugee Rights, the Coalition for Humane Immigrant Rights of Los Angeles, and the Mexican American Legal Defense and Education Fund.

Mayorkas was promoted to the position of Deputy Secretary of the Department of Homeland Security, to fill the vacancy left by the departure of Jane Holl Lute from that post. Nominated by Obama in June 2013, Mayorkas was confirmed as the Deputy Secretary on December 20, 2014 following a party-line Senate vote.  Upon his confirmation, he became the highest-ranking Cuban-American in the Obama administration.

In October 2016, Mayorkas joined the law firm of Wilmer Cutler Pickering Hale and Dorr in the firm’s Washington office.

On November 23, 2020, President Joe Biden announced his plan to nominate Mayorkas to be Secretary of Homeland Security.