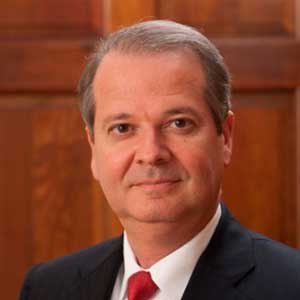 Alex Villalobos received his B.A. from the University of Miami and his law degree from Florida State University. He later served as an Assistant State Attorney for the Second Judicial Circuit of Florida. He was a Republican member of the Florida Senate, representing the 38th District from 2001 through 2010. Previously he was a member of the Florida House of Representatives from 1993 through 2000. He served as the Republican Majority Whip from 2001 to 2002 and as the Republican Majority Leader from 2004 to 2006 in the Florida Senate.  His grandfather, Jose D. “Lolo” Villalobos was re-elected six consecutive times as mayor of Guanabacoa, Cuba (1940–1959).  Since leaving the legislature, Villalobos has been an outspoken advocate for reform of the judicial system. He is the founding president of Democracy at Stakeand also serves on the board of directors for Justice at Stake, a national judicial watchdog group.  He currently practices at the law firm Meyer, Brooks, Demma and Blohm, P.A.  He is the recipient of the 2010 Perry Nichols Award, the highest honor bestowed by the Florida Justice Association (previously known as the Academy of Florida Trial Lawyers), in recognition of a lifetime of outstanding service to the cause of justice.