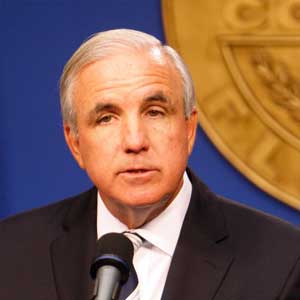 Congressman Carlos Antonio Gimenez represents the people of Florida’s 26th congressional district, encompassing all of Monroe County and the southwest portion of Miami-Dade County. First elected to Congress in 2020, he serves on the Transportation and Infrastructure Committee, the Homeland Security committee, and the Science, Space, and Technology Committee. He is also a part of the Freedom Force Caucus.

Congressman Gimenez was born in 1954 in Havana, Cuba.  Gimenez and his family came to the United States in 1960, and he was educated at Christopher Columbus High School and earned his Bachelor’s Degree in Public Administration from Barry University. In 1993, he completed the Program for Senior Executives in State and Local Government at Harvard University’s John F. Kennedy School of Government.

A Republican, Gimenez assumed the office of mayor  in 2011 after a special election, and was subsequently reelected in 2012 and again in 2016 until 2020.  Prior to becoming Mayor, Gimenez served on the Board of County Commissioners for seven years as Commissioner for District 7. He also served as Chairman of the Government Operations Committee and Chairman of the Regional Transportation Committee, which oversaw Miami-Dade County’s transportation systems. He has also previously served as Manager of the City of Miami.

Mayor Gimenez spent 25 years with the Miami Fire-Rescue Department before becoming City Manager, including nine years as Chief, during which time he was credited with modernizing the department and overseeing the largest reorganization in the department’s history.

Mayor Gimenez is married to the former Lourdes Portela. They have three children and six grandchildren.