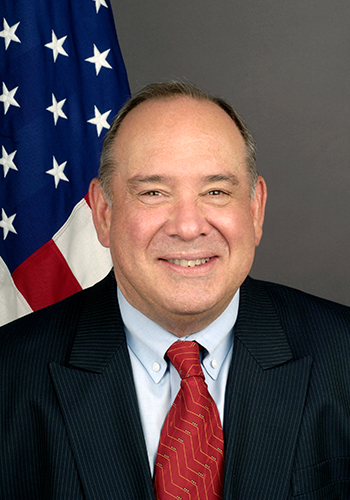 Aguirre holds a Bachelor of Science degree from Louisiana State University. He is a graduate of the American Bankers Association’s National Commercial Lending Graduate School. He has received honorary doctorates from the University of Connecticut, the University of Houston, and the Universidad Tecnológica de Santiago in the Dominican Republic.

He was the United States Ambassador to Spain and Andorra, appointed by President George W. Bush, from June 24, 2005 until January 20, 2009.

Before his appointment as ambassador, Aguirre served from February 7, 2003, as the first Director of U.S. Citizenship and Immigration Services (USCIS), an Under Secretary rank position in the Department of Homeland Security. At USCIS, Mr. Aguirre led a team of 15,000 employees serving over 6 million annual applicants seeking immigration benefits.

He resides in Houston, Texas.