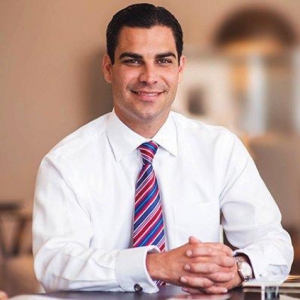 Born in Miami on October 6th, 1977, Francis X. Suarez is the 33rd and first ever Miami-born Mayor of the city of Miami, having been elected on November 7th, 2017. His campaign centered on issues like improving public transportation, expanding affordable housing, bettering public safety and keeping Miami innovative. Prior to becoming Mayor, Suarez served as City of Miami Commissioner for District 4. He also serves as Vice-Chair of the Miami-Dade Transportation Planning Organization (TPO) and also served as President of the Miami-Dade County League of Cities.

In his first ever State of the City Address in 2018, Suarez championed technological advances in the city.
Before entering the world of politics, Francis Suarez founded a successful real estate firm before going on to practice law, specializing in real-estate and corporate transactions. He is the son of Miami-Dade County Commissioner Xavier Suarez.

The Honorable Carlos E. Díaz-Rosillo, PhD, is Senior Deputy Chairman of the National Endowment for the Humanities.  In this... read more