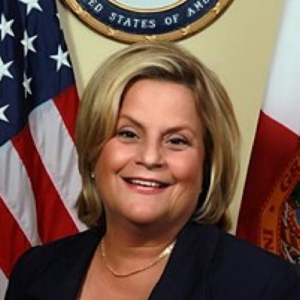 Ileana Ros-Lehtinen was born in Havana, Cuba in July, 1952. At the age of eight, her family was forced to flee from the communist regime of Fidel Castro. They settled in Miami.

Ros-Lehtinen attended Southside Elementary School in Little Havana, West Miami Junior High, and Southwest High School. She earned an Associate of Arts degree from Miami-Dade Community College in 1972, Bachelors and Masters Degree in Education from Florida International University in 1975 and 1985 respectively, and a Doctorate in Education from the University of Miami in 2004.

In 1982, she was elected to the Florida State House of Representatives and the Florida Senate in 1986, becoming the first Hispanic woman to serve in either body. In 1989, Ros-Lehtinen became the first Cuban American and Hispanic woman elected to Congress. She served as Chairwoman of the House Foreign Affairs Committee from 2011-2013. She gave the first Republican response to the State of the Union address in Spanish in 2011, and gave the third in 2014.

On April 30, 2017, Ros-Lehtinen announced that she would not be running for re-election in 2018.  Currently she is a Senior Advisor to the lobbying firm Akin Gump Strauss Hauer & Feld.