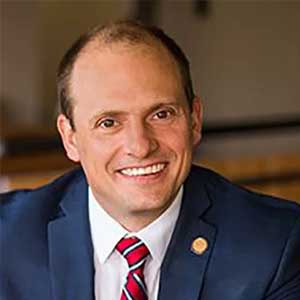 Jose Javier Rodriguez was born in High Point, North Carolina in 1978. Rodriguez spent his youth in Miami and became an Eagle Scout. He was educated at Brown University, earning a bachelor’s degree in International Relations, and at Harvard Law School, where he earned a JD.  He joined the United States Peace Corps and served in Senegal as a business advising volunteer. He served as an adjunct clinical professor the Carlos A. Costa Immigration & Human Rights Clinic at the Florida International University College of Law, and worked as an attorney for Florida Legal Services as well as a trial attorney at the personal injury law firm of Kelley/Uustal.

Rodriguez was elected to the Florida House of Representatives in 2012 as a Democrat and served two terms. He was then elected to the Florida Senate in 2016 and represents District 37, serving on the Rules, Ethics and Elections, Community Affairs, and Commerce and Tourism Committees. Rodriguez also serves on the Appropriations Subcommittees on Criminal and Civil Justice, Finance and Tax, and General Government.