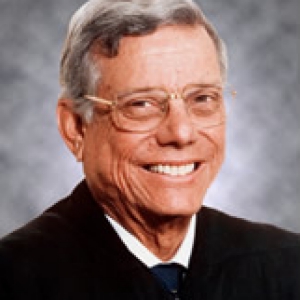 Mario P. Goderich was born in Santiago de Cuba.  While still living in Cuba, his parents enrolled him in high school in Virginia. After graduating from high school, he returned to Cuba, where he attended the University of Havana School of Law. He received his Doctor of Civil Laws degree in 1957.  He practiced law in Cuba with the firm of Castellanos & Goderich. Judge Goderich immigrated to the United States in 1961, working in non-legal positions.  He worked his way through the University of Miami School of Law receiving his Juris Doctor in 1966.  He was associate law librarian at the University of Miami School of Law and later became the University of Miami Law Library director and instructor of law.  He was one of the founding members and president of the Cuban American Bar Association. After becoming an American citizen, he was admitted to The Florida Bar in 1969. Judge Goderich was appointed in 1975 by Governor Reubin Askew as a judge of Industrial Claims.  In 1978, he was appointed judge for the Eleventh Judicial Circuit by Governor Askew and was reelected unopposed in 1980 and 1986.  Governor Bob Martinez elevated Judge Goderich to the Third District in 1990.  He was the first Cuban-American to sit on all three of those courts.  Judge Goderich retired from the Court in 2005 upon reaching mandatory retirement age.