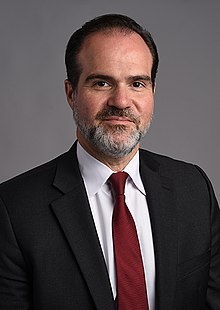 Mauricio Claver Carone was born in 1975 in Miami, Florida to parents of Cuban and Spanish descent.  He earned his Bachelor of Arts degree from Rollins College, Juris Doctor from The Catholic University of America and Master of Laws in International and Comparative Law from Georgetown University Law Center.

Claver Carone began his career as an Attorney-Advisor for the U.S. Department of the Treasury’s Office of the Comptroller, where he provided counsel on banking laws, capital requirements and securitizations. He was also a Clinical Assistant Professor at The Catholic University of America’s School of Law, an Adjunct Professor at The George Washington University’s National Law Center and a Research Fellow at Georgetown University’s Law Center for the Americas.

He then served briefly as acting U.S. Executive Director at the International Monetary Fund, representing the United States on the Executive Board.  He played an important role in lending arrangements for Argentina, Barbados and Ecuador, and revolving credit lines for Colombia and Mexico.

In September 2018, Claver-Carone was appointed Special Assistant to U.S. President Donald Trump and Senior Director for Western Hemisphere Affairs on the National Security Council.  In 2019, he was promoted to become a Deputy Assistant to the President. In this role, Claver-Carone is credited for creating the U.S. government’s maximum-pressure campaign against the Maduro regime in Venezuela and for conceptualizing the “América Crece” economic growth strategy and frameworks.  He was also selected by President Trump to represent the United States in inauguration delegations to Brazil, Panama and Uruguay.

He was elected President of the Inter-American Development Bank by its Board of Directors on September 12, 2020, for a five-year term beginning on October 1, 2020. Thirty of the Bank’s 48 governors voted for him (67% of total shareholding), including 23 out of the 28 regional governors.  As president, he oversees the operations of the IDB Group, comprising the IDB, which works with the region’s governments; IDB Invest, which works with the region’s private sector; and IDB Lab, which incubates innovative development projects.  He has pledged to focus on regional job creation, especially through digitalization, entrepreneurialism and nearshoring, during his presidency. He also begun efforts to secure a capital increase for the Bank, which would allow it to boost its lending to help counter the effects of COVID-19 and further address entrenched economic problems in the region.

He resides in Washington, D.C.