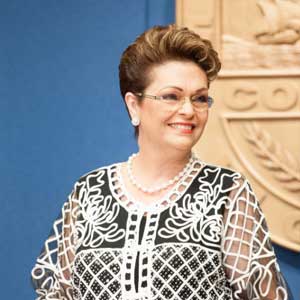 Rebeca Sosa has served on the Miami-Dade County Commission as District 6 commissioner since June 2001. She has been re-elected four times – most recently in 2014 without opposition- to represent the communities of City of Miami, Coral Gables, West Miami, Hialeah and Miami Springs. On November 20, 2012, she was elected by her colleagues as Chairwoman of the County Commission where she will serve a two-year term.

Prior to joining Miami-Dade County, Commissioner Sosa served as mayor of the City of West Miami from 1994 to 2001 where her leadership resulted in the city’s recovery from a 52% budget deficit, thus removing it from the Governor’s Emergency List. During her tenure, she was able to secure more than $5 million in grants for the City for capital improvement projects  as well as improvements to its drainage and parks systems.

Commissioner Sosa has been happily married to her husband Armando for the past 36 years. She is the proud mother of Armando, Jr. and Veronica, and grandmother to Alexander.