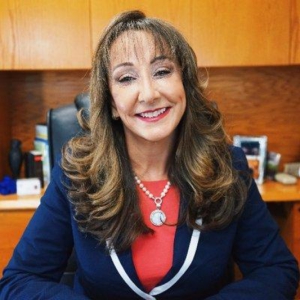 Susie V Castillo was born in Cuba in 1960 and came to Florida in 1961 with her family. She attended Hialeah Senior High School, and earned a Bachelor’s Degree in Public Administration from Barry University.

Castillo began a career in Miami-Dade County Public Schools working at various levels of the administration, including the Superintendent’s Office and the office of a School Board Member. She went on to serve as Chief-of-Staff to the first Mayor of the City of Doral for over eight years. During her tenure, she helped develop city-wide education programs in Doral such as a financial literacy program, in conjunction with the U.S. Federal Reserve Bank.

Castillo also works as Director of Alumni Relations for Florida International University. She established the the Andrea Castillo Foundation, which provides scholarships to students majoring in Education at public colleges and universities in Miami-Dade, in memory of her daughter Andrea, a Miami-Dade College graduate and aspiring educator who passed away at the age of 21.

Castillo resides in Doral with her son Kevin.