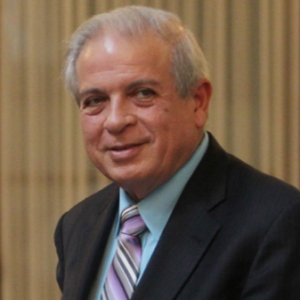 Tomas Pedro Regalado y Valdez is better known simply as Tomas Regalado, the City of Miami’s 42nd Mayor. He was born in Havana, Cuba in May of 1947. At the age of 14, he and his younger brother were one of the many unaccompanied children of Operation Peter Pan in the 1960’s. Regalado was sent to Kendall and later Florida City, where he lived for several months until he reunited with relatives who also fled Cuba. In Miami, he graduated from Immaculate-LaSalle High School and attended seminars at the University of Miami’s Koubek Center for Journalism.

Pursuing a career in journalism, Regalado became the youngest reporter at WFAB, La Fabulosa, a Cuban-American radio station based in South Florida. He quickly ascended to Assistance Producer, and was later hired by WCKT (now WSVN) as the Latin American News Editor and host of a news program. His journalism career led him throughout several significant roles within different agencies and he even became an international news correspondent, covering developments in Africa like the civil war in Angola, riots in Soweto, South Africa and the civil war in Mozambique. He also interviewed high profile figures including US Presidents Nixon, Ford and Carter. In 1983, he became the first Cuban-American member of the White House Press Corps.

Regalado returned to South Florida to excel at the role of News Director in Spanish-language radio as well as serving as a weekly columnist for El Nuevo Herald.

In 2009, Tomas Regalado was elected Mayor of Miami, after having served as a Miami Commissioner from 1996 to 2009. As Mayor, one of his accomplishments was to balance Miami’s budget and leading Miami into the emerging world of technology, as well as promoting research about sea level rise. He was elected for a second term in 2013 and served until 2017.