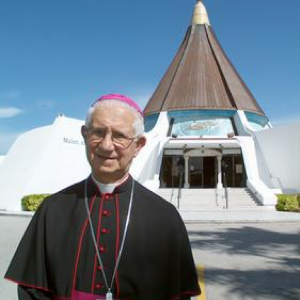 Agustín Aleido Román Rodríguez was the Auxiliary Bishop of the Roman Catholic Archdiocese of Miami and the Titular Bishop of Sertei. He was born in San Antonio de los Baños in May 1928.

He was expelled from Cuba on September 17, 1961, by the Communist regime along with another 130 priests and the Auxiliary Bishop of the Archdiocese of Havana, Eduardo Tomas Boza-Masvidal, on the Spanish ship Covadonga.

From 1962 to 1966, he was Spiritual Director and Professor at the Institute of Humanities in Temuco, Chile. From 1967 to 1973, he was the chaplain of Mercy Hospital in Miami, United States. On February 6, 1979, he was appointed by Pope John Paul II as the Auxiliary Bishop of the Archdiocese of Miami; his Principal Consecrator was Miami’s Archbishop, Edward Anthony McCarthy. On March 24, 1979, he was consecrated Titular Bishop of Sertei. He was the first Cuban bishop in the United States.

Bishop Román was identified with the National Shrine of Our Lady of Charity in Miami until the very end of his mortal life. His exhortations raised enough money to pay for the construction, which he oversaw. He remained active there, first as its Director, from 1967, and then as its Rector Emeritus, after retiring from active ministry in 2003. He was considered the principal spokesman for Catholic Cuban-American exiles.

He studied philosophy at the San Alberto Magno Seminary in Matanzas and then studied theology at the Seminary of the Fathers of Foreign Missions in Montreal, Quebec, Canada. He received a Master’s in Religious Studies from Barry University and a Master’s in Human Resources from St. Thomas University.